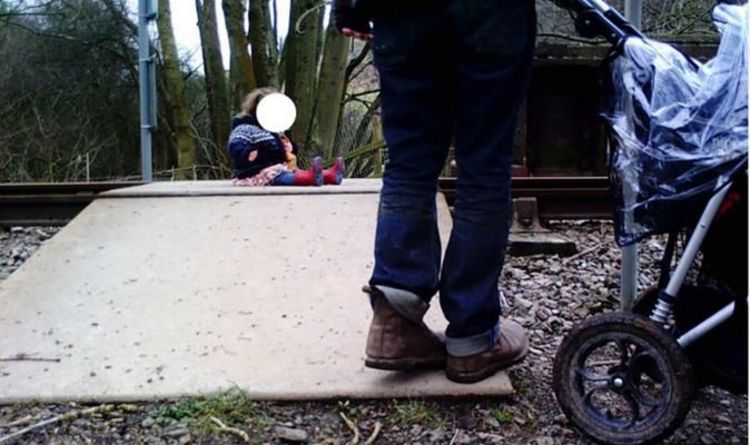 The mum and dad, branded “absolute idiots” and “dangerous” online, put their child on the track to take a “railway selfie,” an irresponsible act the authorities have warned is on the rise in the UK. British Transport Police says more and more people are risking their lives, and those of others, for attention on social media sites, like Instagram, Snapchat and TikTok.

This particular CCTV image was taken in Gwynedd, Wales, after the family had illegally accessed a level crossing.

One disgusted Facebook user wrote: “What a pair off absolute idiots, and I hope they get caught.”

Another shared: “Should have the child removed for reckless endangerment.”

And another comment reads: “What on earth is wrong with people?”

In order to tackle the rise in irresponsible behaviour, Network Rail, British Transport Police and Transport for Wales have worked together to create a new film.

Ronnie Gallagher, route level crossing manager at Network Rail said: “Our campaign has been designed to complement our priorities of risk management, education and enforcement, all while encouraging people in Wales to consider the true cost of taking a risk at a level crossing.

“With an expected rise in staycations and holidays to Wales this summer ― not to mention the imminent arrival of the school holidays, there has never been a more important time for us to launch a safety awareness campaign around level crossings.”

Jody Donnelly, train driver at Transport for Wales said: “Over the years, myself and many of my colleagues from within station, driver and conductor roles have had to deal with hundreds of frightening and sometimes tragic occurrences at level crossings.

“People seem to think that the worst won’t happen to them but if you’re caught short at a level crossing, it simply isn’t true.

“Unlike cars, trains can take hundreds of metres to stop when travelling at top-speed, meaning that a decision to nip across the tracks can be fatal.”

Ms Donnelly added: “I have no doubt that our campaign will help to save lives this summer ― and with this, I hope it will allow myself and my team to rest a little easier.

“Knowing that despite rising social media trends, our customers are educated on the very real dangers of level crossings.”

Richard Powell, Inspector at British Transport Police said: “Messing around on level crossings including lingering to take photos is illegal and extremely dangerous. You could be taken to court and face a £1,000 fine.

“Trains approach almost silently, so if you’re distracted, you won’t notice until it’s too late. Take care around level crossings. No photograph is worth the risk to you or the consequences for your family and any bystanders.”