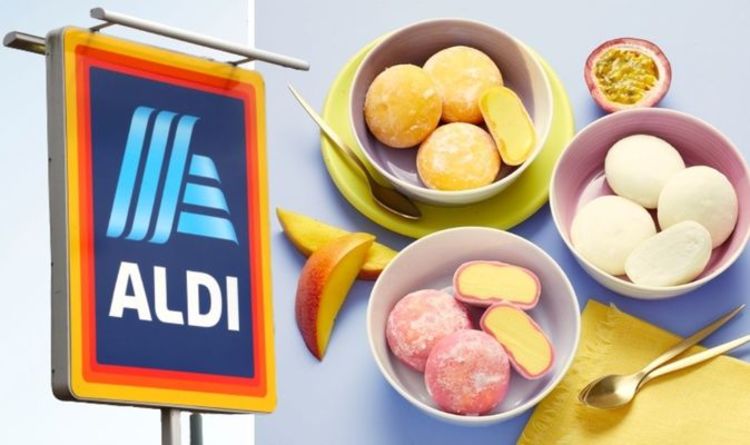 Aldi is launching its very own Japanese-inspired premium dessert, Mochi Balls, after they caught the attention of more than 500 million viewers on TikTok since the beginning of the year. The discount supermarket is launching various different flavours into stores including tropical, mango and coconut.

At the beginning of the year, the internet became obsessed with Mochi, with the Little Moons version selling out in all supermarkets.

The bite-sized Japanese treat consists of creamy gelato ice cream in a layer of Mochi dough that has a soft and chewy texture.

In February, Tesco saw a huge 700 percent increase in sales of Little Moons’ version, while Waitrose saw a 350 percent rise in sales.

At the time, co-founder of Little Moons, Howard Wong, said: “The Little Moons TikTok craze started with some creators, perhaps suffering from a bit of lockdown fatigue, filming themselves going on an adventure to ‘big Tesco’ in search of our Mochi ice cream.

READ MORE: Aldi to launch Christmas products in stores as part of Junemas

Hitting shelves from May 17, Aldi’s Wao Mochi Balls will be available in stores nationwide.

Customers can pick between tropical, mango and coconut flavours, which are all available for just £3.49 a pack.

Taking to the Aldi Shoppers UK Facebook forum, shoppers have shared their excitement for the arrival of the tasty dessert.

One person said: “I’ve been waiting for this one.”

Another wrote: “They look exactly like Little Moons, I hope they taste just as great.”

“Omg Little Moon replicas, maybe I will actually be able to find this,” a third commented.

In other Aldi news, the supermarket announced earlier this week that it will be launching Christmas treats into stores to celebrate Junemas.

The discount retailer said on Twitter: “Let’s be honest, last Christmas didn’t have our hearts, and sleigh bells weren’t ringing like they usually do.

“Time for round two! Just one thing. It’s in June.”

The supermarket added: “Introducing Junemas. Mark your calendars for June 25th and look out for some surprises in store! #AldiJunemas.”
As part of Junemas, Aldi is bringing back some Christmas favourites into stores including mince pies, which will be available to pick up from June 21.

Consumer group Which? has also crowned Aldi as the cheapest UK supermarket for the month of April, beating its rival discounter Lidl by just 12p.

Julie Ashfield, Managing Director of Buying at Aldi, said: “We continue to focus on providing the best possible value to our customers, and are immensely proud to be named the UK’s cheapest supermarket for April.”