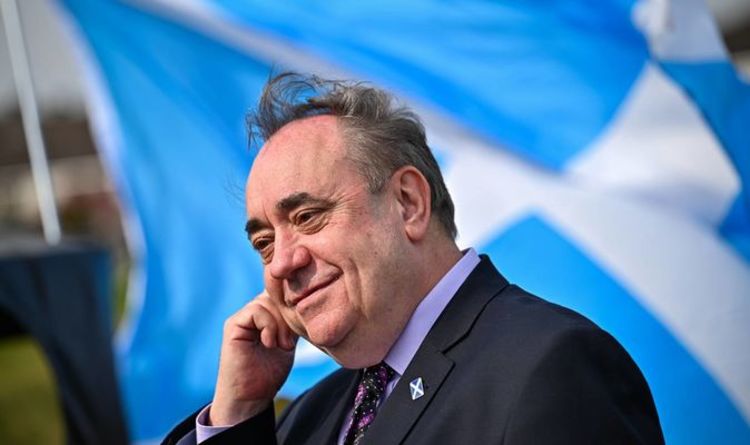 Alex Salmond took aim at the BBC and blasted the broadcaster for preventing his appearance on televised leaders debates which he says is one of the key reasons for Alba’s election failure. He explained the BBC allowed smaller and fringe parties to attend TV debates adding it had a “harsh effect” on the polls. The Alba party failed to secure any seats at the Scottish Parliamentary elections after Mr Salmond reentered political life to bolster pro-independence support in Holyrood for another referendum.

Appearing on LBC to discuss the Scottish election, radio host Tom Swarbrick asked Mr Salmond why he did “so badly” in the election.

“I’m afraid we made some of the mistakes in a six-week period in our electronic infrastructure, which is now superb in our party’s headquarters.

“These were not ready for launch which was a problem but these are things that happen when you’re trying to do things in six weeks.

“The key thing in the election was the BBC not letting us into the television debates.”

Several leaders debates were held by the BBC and Channel 4 in the run-up to the May elections which saw the SNP, Labour, Conservatives, Green and Lib Dems represented.

At the time, Mr Salmond alongside George Galloway who was also running in the Scottish elections blasted the broadcasters for preventing them from speaking.

The broadcasters stated they only invite the major parties for the leaders debates in their defence.

The SNP saw a seat gain during the Scottish parliamentary election but failed to secure an overall majority in Holyrood.

But nationalists have seen the election as a big win for the independence movement as there now exists more pro-independence parties thanks to the two seats gained by the Greens.

With the SNP on 64 seats and the Greens on 8, nationalists have argued there is a strong mandate for another independence referendum due to an overall majority in Holyrood.

However Scottish Conservative leader Douglas Ross continues to challenge that notion by stating many will have voted for these parties not for their independence campaigning.