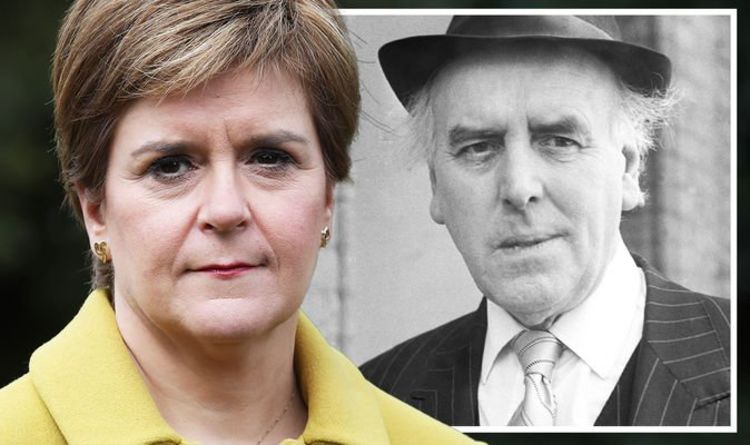 The outspoken chairman of GB News pointed out the SNP leader told Scots during the campaign a vote for the SNP was “not voting for independence”. But shortly before polls opened she insisted “she now had a mandate for a second referendum”, he said.

Writing in his latest column for MailOnline, Mr Neil slammed Mrs Sturgeon’s actions as he compared her to the character Arthur Daley from sitcom Minder.

He wrote: “No sooner were the election results in than Sturgeon had morphed into the Arthur Daley of Scottish politics.

“Those of you who remember the hilarious 1980s comedy hit Minder, starring the peerless George Cole as Arthur Daley with Dennis Waterman as his bodyguard (or ‘minder’), will recall Daley was the classic dodgy second-hand car dealer.

“Come and see this car that’s just come in, he’d say. It’s in great nick and a real bargain!

“It happened even sooner than he had anticipated. Only last month the First Minister told ITV that a vote for the SNP was ‘not voting for independence’; indeed ‘you are not even voting for another independence referendum’.

“It was, she stressed, all about making sure pandemic recovery was in her tried and tested hands.

“Yet even before the final votes had been counted over the weekend, she was out in front of the TV cameras insisting she now had a mandate for a second referendum.

“It was the ‘will of the people’ and anybody who denied it was ‘picking a fight with the democratic wishes of the Scottish people’.”

“Political bait-and-switch in action. Daley would have been proud.”

Mr Neil’s column comes after Mrs Sturgeon told Boris Johnson it was a case of “when – not if” Scotland holds another referendum.

An SNP party spokeswoman revealed that the pair spoke on the phone over the weekend.

She added: “The FM also re-iterated her intention to ensure that the people of Scotland can choose our own future when the crisis is over, and made clear that the question of a referendum is now a matter of when – not if.”

Mr Johnson said it would be “reckless and irresponsible” to have a referendum right now.