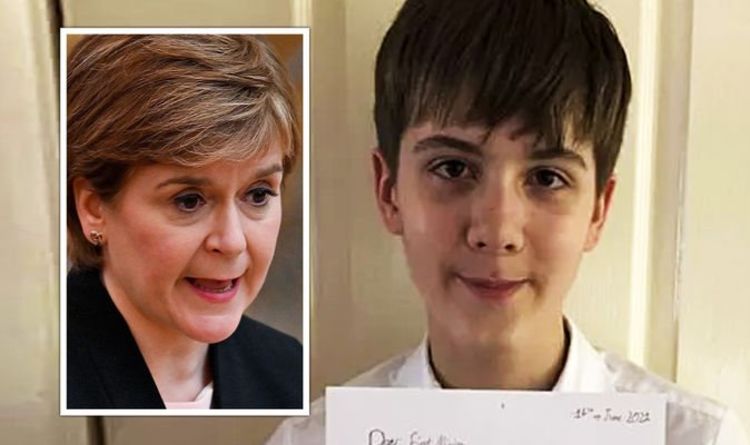 Murray Gray, aged eight, suffers from myoclonic astatic epilepsy and relies on cannabis oil to treat his rare condition. Murray used to have hundreds of seizures a day and relied on a wheelchair before the oil transformed his life and enabled him to attend school full-time.

His mum Karen Gray, 47, had to travel to the Netherlands every few months to buy the oil and smuggle it back into the UK.

But in July 2019,a supplier obtained a licence from the Home Office to import the drug legally and sell it to the family through a pharmacy in Glasgow.

The medication costs £1,300 each month and the family, who must foot the bill themselves, are running out of money.

READ MORE:‘Bitter’ Rejoiner’s call to back Denmark against England backfires

He begged for financial aid and said it is not fair his parents have to spend so much money on medicine the government has agreed is safe and legal for use in the UK.

But the family were left devastated after they received a response stating “stronger evidence” was needed before the Scottish Government could offer financial support.

Sturgeon said she was “deeply sorry” for the family’s difficulties and has asked the government’s Chief Pharmaceutical Officer to explore alternative avenues of support.

Mum Karen said: “I am grateful that the First Minister wrote back, however, I am infuriated that nothing is being done to help. I am devastated that Ms Sturgeon appears to have either not understood the letter or has understood the issues but decided not to act.

“Ms Sturgeon raises the issue of safety but three children in the UK already have an NHS prescription. If such a prescription is safe in those cases, surely it would be safe for Murray.

“I’m going to write back to the First Minister to explain that Murray already has a specialist clinician writing Murray’s prescription. She is a private paediatric neurologist in London. If it wasn’t safe she wouldn’t prescribe it.”

Dean’s letter was delivered to Bute House on June 16 coinciding with the three year anniversary of the first long term licence to use medical cannabis in the UK.

In June 2018, the then UK home secretary Sajid Javid granted Alfie Dingley the first individual long term licence to use medical cannabis in the UK.

Karen has asked the First Minister to reconsider the request and provide Murray with a similar prescription.

He said: “The Government must step in and cover the cost of private prescriptions that many people like Karen are currently having to cover themselves.”