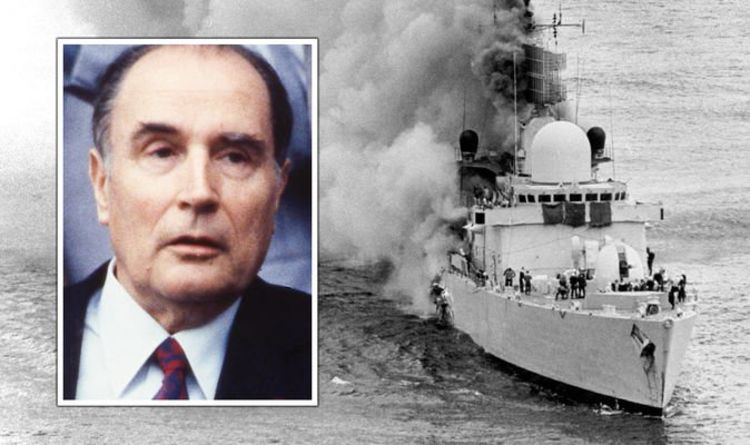 The UK and Argentina have long argued over the sovereignty of the Falklands, which boiled over into conflict when the South American country invaded in 1982. The war lasted 74 days and ended with more than 900 casualties and an Argentine surrender. Former UK Defence Secretary Sir John Nott once described France as Britain’s “greatest ally” during the conflict and Paris gave substantial support to the UK throughout.

But formerly secret documents seen by the BBC showed that the French may have been working both sides.

They showed that Exocet missiles were sold to Argentina by France prior to the war before it seemed likely the two countries would enter into combat with each other.

Mike Thomson, the Foreign Affairs correspondent for BBC Radio 4’s ‘Today’ Programme, detailed: “At the time, few suspected that the regime’s longstanding claim on the Falklands would lead to war, and the sale went largely unnoticed.

“But when in May 1982 these Exocet missiles were used to strike Britain’s HMS Sheffield and Atlantic Conveyor, with the loss of 32 British lives, near panic ensued in London.”

The missiles were reportedly fired at HMS Sheffield and Atlantic Conveyor. The former sank while under tow on May 10, 1982.

At the start of the conflict, France’s left-leaning president, Francois Mitterrand, helped Britain by declaring an embargo on French arms sales and assistance to Argentina.

He also allowed the Falklands-bound British fleet to use French port facilities in West Africa, as well as providing London with detailed information about planes and weaponry his country had sold to Buenos Aires previously.

Paris also cooperated with extensive British efforts to stop Argentina from acquiring any more Exocets on the world’s arms market.

But Mr Thomson claimed Mr Mitterrand’s policy “provoked dissent” among “senior members” in the French foreign ministry, who apparently did not see eye-to-eye.

READ MORE: ‘Stabbed in back’ UK bailed France out in Mali, only for Macron to spark Jersey chaos

“In what would appear to be a clear breach of President Mitterrand’s embargo, a French technical team – mainly working for a company 51 percent owned by the French government – stayed in Argentina throughout the war.”

In an interview carried out in 1982 by Sunday Times journalist Isabel Hilton, the team’s leader, Herve Colin, admitted carrying out one particular test that proved invaluable to Argentinian forces.

He said: “The verification process involves determining if the missile launcher was functioning correctly or not.

“Three of the launchers failed. We located the source of the problem and that was it. The rest was simple.”

Mr Thomson claimed “it is now clear” that “thanks to the tests they carried out” the Argentinians were able to fire Exocets at the Royal Navy from three previously faulty missile launchers.

AirPods (3rd generation) review: Apple has given you a tough choice...