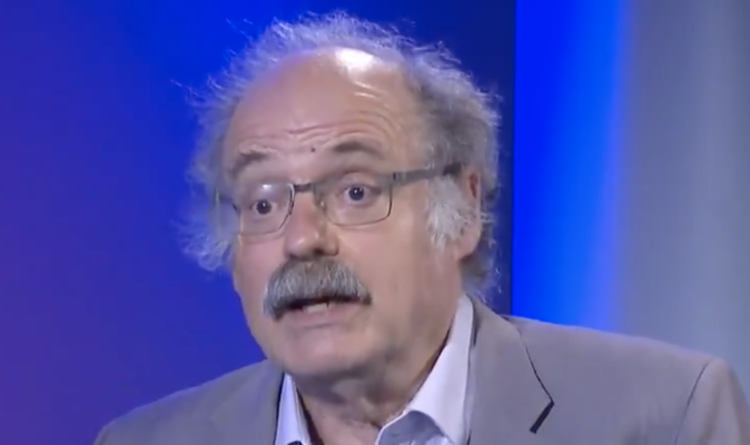 Sir Mark Walport, Chief Scientific Adviser from 2013 to 2017, appeared on BBC Newsnight with Emily Maitlis to discuss the impacts of Covid on people who catch the virus. As England approaches the end of lockdown on July 19, officials and scientists warn cases could reach as high as 100,000 a day.

The former adviser spoke about the “profound” effect Long Covid has on those with the virus, and warned rising cases could see many more suffer.

He told Ms Maitlis: “Well we should never forget that actually many people, even if they don’t end up in hospital, get quite a nasty infection.

“A fraction of them, maybe five or ten percent, which is a lot of people, are going to end up with prolonged symptoms.

“There’s a lot we don’t know about Long Covid and it probably represents three or four different things, but there’s no question.

“Apparently mild infection at the time can leave people with quite profound and prolonged disability.”

Ms Maitlis suggested some who catch the virus “might not know” whether they will develop Long Covid, which the former adviser agreed with.

He added: “(You don’t know whether) you’ll still end up with prolonged symptoms, particularly with fatigue and malaise.

“What we’re seeing is we’ve got 27,000 cases on average a day, a doubling kind of between one week and two weeks, and that is on the current level of social restrictions.

“If we take the breaks off completely, then the doubling time may go up even more.

“And so, the Prime Minister did say we mustn’t throw caution to the wind, and we really mustn’t.”

Chris Whitty, Chief Medical Officer, admitted he expected “a significant amount more long Covid” in the period after July 19, especially for younger people who have not been fully vaccinated.

He warned that it was not yet proven whether vaccines provide protection against the condition, characterised by extreme fatigue, “brain fog”, and physical problems such as muscle weakness.

Prof Whitty added the challenge from long Covid “is not going to be trivial”, and that the UK must go “hell for leather” to drive down infection rates and complete the vaccination programme.

July 7 saw 32,548 cases, 33 deaths within 28 days of a positive coronavirus test and a further 386 people admitted to hospital with the virus.

As of Tuesday, 2,446 patients are currently in hospital and as of Monday 393 are on ventilation.