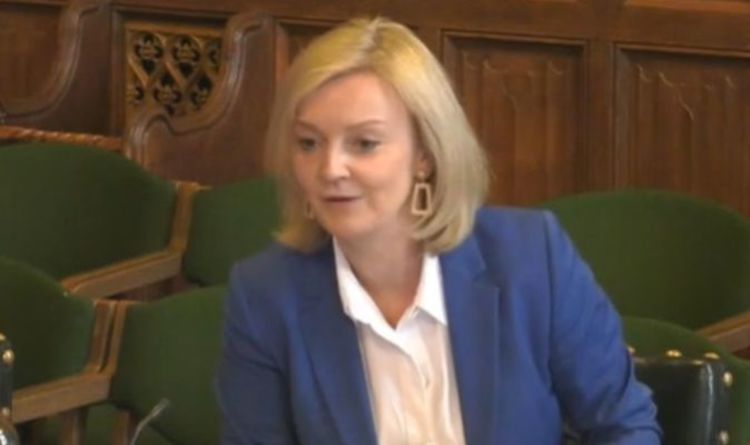 Speaking at the International Trade Committee, Ms Truss rubbished any fears the UK will lower its standards following the signing of the free trade deal with Australia last month. With the UK set to target new markets, Ms Truss claimed Brexit Britain had been restricted while being a member of the EU. Although some have claimed the UK will be flooded by an influx of lower grade Australian products, Ms Truss insisted British beef and lamb is the “best in the world” and will not be undercut.

She told MPs today: “First of all, we are not lowering our import standards.

“We have agencies there to make sure any good imported to this country will be healthy and safe.

“That does not change under its agreement.”

Outlining her post-Brexit plans, she claimed UK farmers will now have greater opportunities in the US, the Gulf and the Asia-Pacific.

She added: “Being a part of the EU for 50 years, we didn’t have those opportunities.

“We did have free trade with Australia and New Zealand before our membership.”

Asked by chair and SNP MP for Na h-Eileanan an Iar covering the Outer Hebrides, Angus MacNeil, that British producers are losing out currently now outside of the EU, Ms Truss boasted British produce can compete with any equivalent in the world despite Remainer fears.

She added: “British beef and lamb is the best in the world.”

In order to block fears of UK farmers being undercut, Ms Truss included a 15-year period whereby Australian imports will be capped.

This will give UK farmers a period of adjustment in order to make changes to trade.

If too much beef and lamb is imported after 10 years, the UK will create a new tax called a safeguard duty which can be applied for a further five.

The deal is also seen as the final ingredient for the UK’s membership of the Comprehensive and Progressive Agreement for Trans-Pacific Partnership (CPTPP).

The alliance is made up of 11-countries and removes 95 percent of tariffs on all goods.

The combined GDP of the alliance is currently valued at £9trillion and could rise to £11trillion with the UK’s membership.

The alliance also accounts for 13 percent of global GDP and could increase to 16 percent with the UK.

She said last month: “CPTPP already has significant global presence, and our accession would send a powerful signal to the rest of the world that the UK, as an independent trading nation, will continue to champion free and fair trade, fight protectionism and slash tariffs at every opportunity.

“It will mean stronger trading links with the Indo-Pacific, which is vital to our goals for trade, investment, supply chains as well as supporting green growth, women’s economic empowerment and high standards for British workers.

“The launch of negotiations marks a huge milestone in our accession process, and I look forward to talks starting in the coming weeks.”