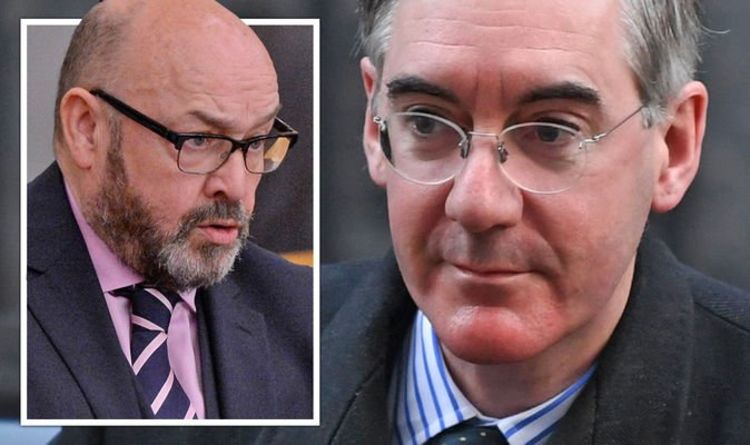 The incendiary comment was made on Twitter by James Dornan, who represents Glasgow Cathcart at Holyrood. Mr Rees-Mogg tweeted a video of himself visiting the UK Border Force National Command Centre, ahead of a new borders bill.

He added the caption: “The bands of blighters bringing illegal entrants to Blighty will be broken up by this brilliant border bill.”

The remark enraged Mr Dornan, first elected to Holyrood in 2011, who lashed out at the practising Catholic.

He replied: “Hope you remember this the next time you go to confession.

“You and your cronies are already responsible for the deaths of thousands and you’re now happy to see the most desperate people in the world suffer and drown.

“If your god exists you will undoubtedly rot in hell.”

Mr Dornan’s outburst sparked swift condemnation from Conservatives in the Scottish Parliament, with one suggesting he should lose the party whip.

Speaking to the Daily Record Stephen Kerr, the Tory chief whip, said: “I try to avoid commenting on this particular MSP; but this latest comment is beyond the pale – the SNP need to tell us why they think it is appropriate they keep this person in their party.”

Annie Wells, who serves as shadow cabinet secretary for health, added: “Stephen is right. James Dornan’s latest outburst is beyond the pale and serious questions need to be asked here.”

“In the Borders Bill they will have the powers that they need to ensure that people have a good case to come in legally will be better treated, but those who try and come in illegally will find that their issues are dealt with more swiftly and more fairly.

“It’s going to be a really important method of securing our borders for the future.

“The people who work here, do a fantastic job to keep us safe, and the country has a great debt of gratitude.”

This means only approved followers can currently read his tweets.

The SNP fell one seat short of a majority in May’s Scottish parliament elections.

However, Nicola Sturgeon is still demanding another referendum on Scottish independence.

Boris Johnson is opposed to a second referendum, and has urged the SNP to instead focus on Scotland’s coronavirus recovery.

The SNP are hoping to get a second referendum bill through Holyrood with support from the pro-independence Greens.