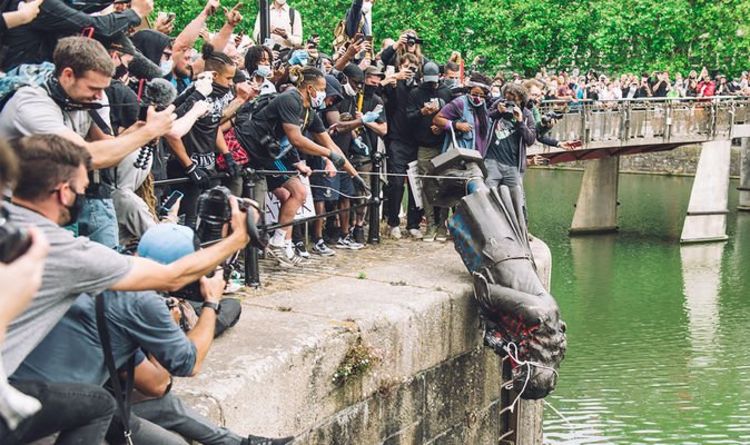 A sculpture of slave trader Edward Colston was pulled down during a BLM protest after the murder of George Floyd in the US sparked protests across the world. The 18th-century monument – which for many was a symbol of Britain’s colonial history – joined a long list of numerous others that have been defaced, removed, or threatened since. It has sparked a so-called culture war, exacerbated further after Prime Minister Boris Johnson branded Winston Churchill’s statue being boarded up as “absurd and shameful”.

He said removing statues of controversial figures was “to lie about our history,” arguing that the protests that followed the death of Mr Floyd had been “hijacked by extremists”.

But it’s not just politicians. Former head girl of Colston’s Girls’ school, Jane Ghosh, also hit out at the decision during the BBC’s ‘Statues War: One Summer in Bristol’.

She said: “I’m supportive of Black Lives Matter. But where do you stop?

“There are statues of all kinds of so-called great and wonderful people – Nelson and Churchill – they’ve done horrible things.

“It’s a shame that people feel that everything has to be erased.

“What you need to get rid of is the racism underpinning all this and not just focus on some guy from the 18th century.”

Colston’s Girls’ School will now be known as Montpelier High School, after a vote by staff and students.

Principal Kerry McCullagh said the new name would “allow the school to forge a new identity that represents its diverse and inclusive community”.

And while Ms Ghosh said she could “see it had to happen because the political climate has changed,” she was still saddened by the events that occurred last summer.

But the college has decided not to take it down for practical reasons.

Now some academics are refusing to give tutorials to undergraduates from Oriel or attend talks there.

The college expressed “sadness” at the decision, while the head of Oxford University said she was “deeply disappointed”.

Number 10 has announced that it expects “appropriate action” to be taken if the teaching of students is disrupted by the dispute, such as providing compensation.