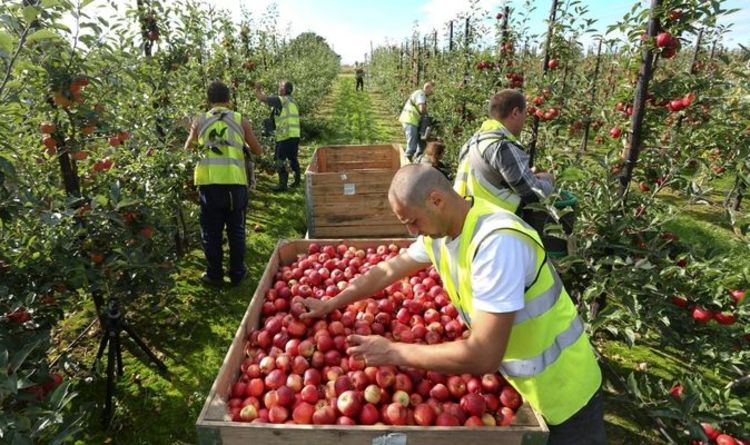 The hourly pay is more than double the current minimum wage, which stands at £8.91 for adults aged over 23. Young adults aged 21-22 are on £8.36, while 18-20-year-olds can expect a minimum of £6.56. The sharp rise in wages is due to a labour shortage in the agriculture industry, which has been blamed on the pandemic and the impact of Brexit.

Fewer seasonal workers are coming in from Europe to carry out the jobs and few Britons are applying for the roles.

While the surge in wages is good for the employees, vegetable growers have hit out at having to hike up wages to “unsustainable” levels, with one farmer saying he is now having to pay labourers 60 percent more than in previous years.

Simon Naylor of Naylor Farms in Lincolnshire, the UK’s largest grower of cabbages, emailed customers to inform them of the new working practices.

He said: “To keep people we have raised wages by 60 percent to nearly £20 per hour for packhouse staff and from this week we are having to pay them to turn up at £20 a day for a weekday and £30 for weekends.

“This now is unsustainable.”

Mr Naylor appeared to blame Brexit, and added: “Yes a lot of us voted out [on Brexit] and now we have this problem!”

Naylor Farms is a family farm that has been operating for some 112 years and now turns over more than £26million a year.

Mr Taylor said that Brexit was to blame for the labour shortage.

He said: “95 percent of all fruit and produce picked and packaged in this country is done by eastern Europeans.

“From the end of June, people who haven’t got pre-settled status, at least, can’t work.”

He added: “We are right at the brink now.”

The Government has implemented a visa scheme to allow in agriculture workers from the EU and the Ukraine.

The scheme allows 30,000 overseas workers to come and work on farms.

But Brexit isn’t the only cause of the labour shortage, with the Covid pandemic limiting travel restrictions between the EU and Britain.

Family furious at £5.50 parking fees as their FIVE cars won’t fit on drive