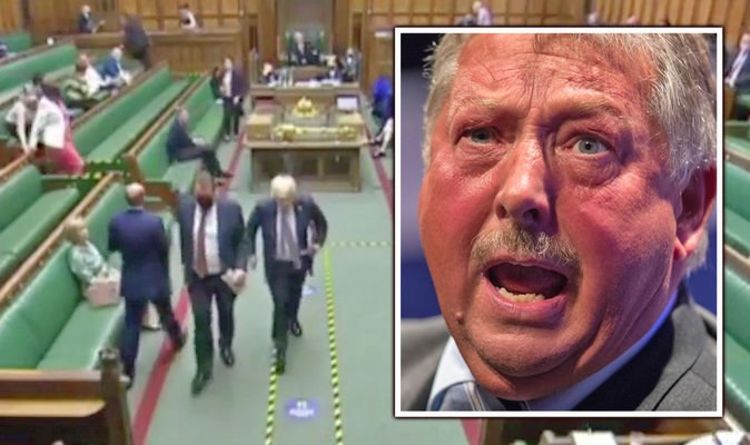 Mr Habib, whose legal challenge to the Protocol was rejected by Northern Ireland’s High Court last Wednesday, highlighted a clip shared by the DUP’s official Twitter account. In it, Mr Johnson is seen to leave the Chamber just as Mr Wilson, MP for East Antrim and the DUP’s chief whip, begins speaking.

Undeterred, Mr Wilson continued: “On 23 June my colleague for Lagan Valley, asked the Prime Minister, whether Article Six of the Act of Union 1800 has been impliedly repealed when the Northern Ireland Protocol was approved by the House of Commons. The Prime Minister, answered emphatically no.”

Referring to the case brought by Mr Habib and others, he pointed out the Mr Justice Colton had agreed with the Government’s lawyers that the Northern Ireland Protocol was not in conflict with the Act of Union because Article Six of the legislation had been “overridden” by the passing of the Withdrawal Act.

He added: “Now here’s the point Mr Speaker. The government’s case was approved, presented and argued before the Prime Minister gave the answer to my colleague in the House of Commons.

“And that answer, therefore, must have been a misleading answer to the House.

“I want to know whether the Prime Minister can be called to apologise for that misleading answer, but more importantly, called to outline what actions to undermine the damage.”

House of Commons Speaker Lindsay Hoyle then intervened to suggest Mr Wilson qualified his remarks by adding the word “inadvertently”.

“And instead of sitting there having the respect he should have the seriousness of the question he got up and walked out of the chamber.

“And he did not use the door near the speaker because if he’d gone near the Speaker, the Speaker would have directed him back to his chair to hear the point of order.

“I think Sammy was too gracious to say that it was an inadvertent misleading of the house, because I think it’s either incompetent or it’s deliberately misleading.”

Mr Habib added: “Here you have a Prime Minister who’s just not prepared to face up to what he’s done.

“This is a government that is just repeatedly misleading the Commons and that is contempt of the Commons.

“It just raises the hair on the back of your neck, to just get up and walk out of the Commons.”

The Northern Ireland Protocol is the mechanism agreed by both the UK and the EU with the purpose of preventing a hard border on the island of Ireland.

Unionist critics – including Mr Wilson – argue that it has resulted in a border down the Irish Sea, effectively driving a wedge between Northern Ireland and the rest of the UK, and damaging the constitution in the process.