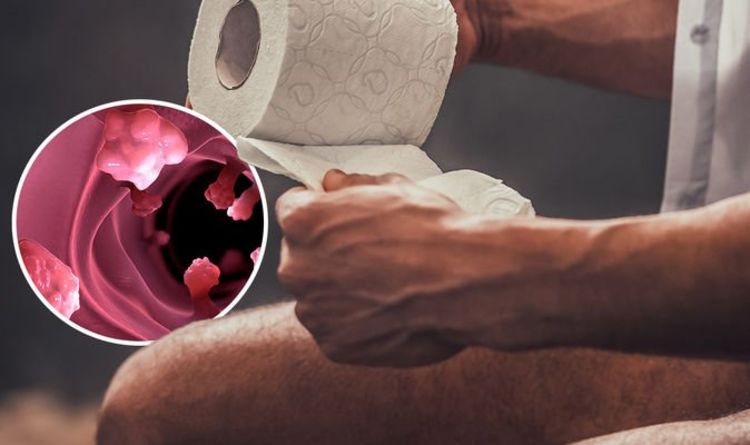 Bowel cancer means cancerous cells have developed and multiplied in the large bowel (colon) and the back passage (rectum). Due to the location of the cancer, many of the symptoms involve change in your normal bowel habit. “The most common symptoms are bleeding from the bowel, a change in bowel habit, such as unusual episodes of diarrhoea or constipation and an increase in the amount of mucus in the stool,” explains Guts UK, a charity for the digestive system.

According to the charity, bowel cancer can enlarge causing partial or complete blockage of the bowel.

This can lead to abdominal pain, constipation and bloating, the charity warns.

“Sometimes tiny amounts of bleeding may go unnoticed but result in the development of anaemia, which may cause tiredness and a decreased ability to work and exercise,” it adds.

Other possible symptoms include:

Having one or more risk factors doesn’t mean that you will definitely get bowel cancer.

Many studies have shown that eating lots of red and processed meat increases the risk of bowel cancer.

As Cancer Research UK reports, it is estimated that around 13 out of 100 bowel cancer cases (around 13 percent) in the UK are linked to eating these meats.

Processed meat is any meat that has been treated to preserve it and/or add flavour – for example, bacon, salami, sausages, canned meat, or chicken nuggets.

The government recommends that people eating more than 90g of red and processed meat a day should reduce it to 70g or less. 70g is the cooked weight.

A linked risk factor is obesity, which means being very overweight with a body mass index (BMI) of 30 or higher.

BMI is a measure of whether you’re a healthy weight for your height.

According to Cancer Research UK, the risk of bowel cancer is higher in people who are obese compared to those who have a healthy BMI.

There are some risk factors you cannot modify, namely family history and age.

“Having a family history of bowel cancer in a first-degree relative – a mother, father, brother or sister – under the age of 50 can increase your lifetime risk of developing the condition yourself,” says the health body.

It adds: “If you’re particularly concerned that your family’s medical history may mean you’re at an increased risk of developing bowel cancer, it may help to speak to a GP.”

Skin cancer: ‘EVERYONE’ at risk warns doctor – 8 early signs your mole could be cancerous