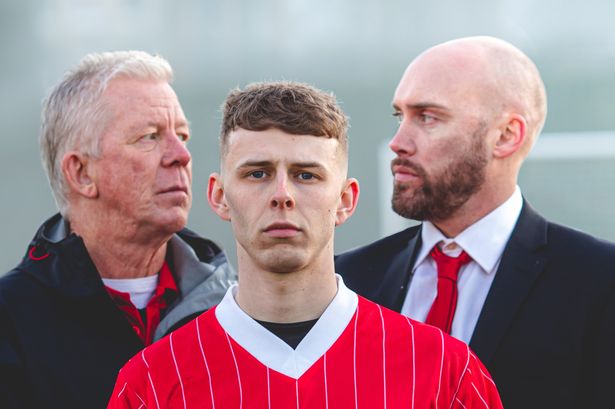 A play about football featuring three generations of Bristolians is back at the Old Vic – almost two years after it was cancelled just hours before it was due to open.

The Red Lion play began its run in early March 2020, starring Broadchurch actor and Bristolian Joe Sims, but the show was stopped and the play’s run cancelled because of growing pressure from the coronavirus pandemic.

The show was stopped in the week before Prime Minister Boris Johnson eventually ordered the first lockdown, and the cast and crew were left – like so many others – in limbo for months.

But now, almost two years after it began, rehearsals for the show have resumed, with another run at the Bristol Old Vic scheduled for early February.

The play returning will mean another crack on the stage for Thomas McGee, a young footballer from Patchway. He was one of 100 or so young male actors who also played football, who answered an appeal by Joe Sims to have an authentic Bristolian voice in the play.

Red Lion is set in the dressing room of a semi-professional football club, and features three generations of football figures – the veteran kit man, played by David Lloyd, the ambitious manager, played by Joe Sims, and the new young prodigy the club have discovered, played by Thomas McGee.

Joe Sims told Bristol Live it was brilliant to get the play back on the stage, and it had been a long two years since the last time the cast and crew were together.

“It feels like we’re on the verge of entering into some kind of normality again,” he said. “Let’s hope we’ve learned some lessons about the kind of future we want and deserve and the things and people that are important. I like that Idles quote: ‘let’s seize the day, all hold hands and chase the p****s away’.”

He urged football fans from across Bristol to come along and see the play – especially people who would never normally dream of going to watch a bit of theatre at the Old Vic.

“This is an hour and a half set in the powder keg environment of a semi professional Bristolian dressing room,” he said. “We especially want anyone who might think that theatre isn’t for them or maybe have never set foot in the gorgeous Bristol Old Vic before to come on in and see us.

“Whether you’re Bristol City, Bristol Rovers or Bristol Manor Farm, this one’s for you! We’ve knocked our pipe out to make it for the people of Bristol and would love you all to come and see it. Come and see us and let us know what you think!” he added.

The play’s director Ed Viney said it was great to finally be back. “The cast are just thrilled to be getting the chance to finally share this brilliant play with Bristol,” he said.

“It feels like we’ve been awarded a last minute penalty and we’re determined to make the most of it!” he added.