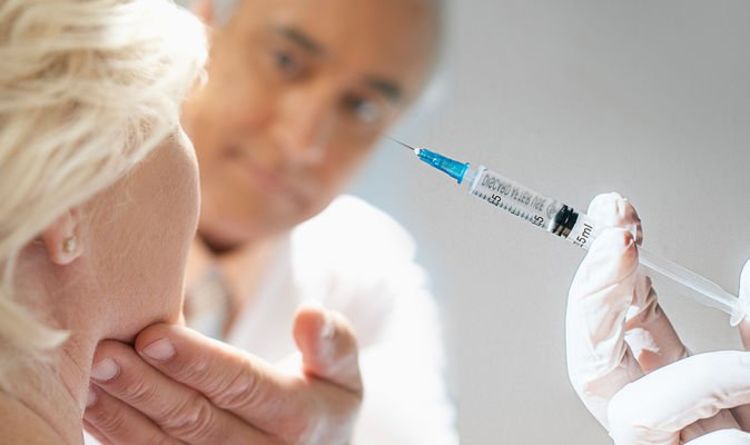 Common side effects, such as a fever, or chills, show that the vaccine has been effective in stimulating an adaptive immune response. Most people experience soreness and redness around the site of injection. There are two rare side effects from the Covid vaccine being reported.

The immune system contains a network of lymph vessels and lymph nodes.

They make up the lymphatic system, which collects fluid, waste, viruses, and bacteria that travel into your tissues outside of your bloodstream, according to the American Cancer Society.

The health site continued: “Your lymph vessels are a bit like blood vessels. But instead of blood, they contain a clear, watery fluid.

“The main job of this fluid is to fight infections with the assistance of white blood cells.

“So basically, our lymph nodes work as filters for potentially harmful substances.”

Common side effects, which may affect up to one in 10 people, include a lump at the injection site, fever, being sick (vomiting) or diarrhoea, or flu-like symptoms.

Uncommon side effects, which may affect up to one in 100 people, include feeling dizzy, decreased appetite, abdominal pain, enlarged lymph nodes, excessive sweating, itchy skin or a rash.

The Government guidance added: “In clinical trials there were very rare reports of events associated with inflammation of the nervous system, which may cause numbness, pins and needles, and/or loss of feeling.”

According to Dr Jonas Nilsen, co-founder of Practio, “adverse reactions to vaccines are far more likely to occur shortly after the vaccine has been given.”

He continued: “The vaccine itself does not remain in the body for long, and the side effects which are felt in the days following it being administered are from your body’s immune response to the vaccine.

“It is, however, important to bear in mind that we can’t rule out the possibility that a very small number of people there might experience adverse effects that we don’t yet know about.”

“In clinical studies with the vaccine, most side effects were mild to moderate in nature and resolved within a few days with some still present a week after vaccination,” reports Public Health England (PHE).