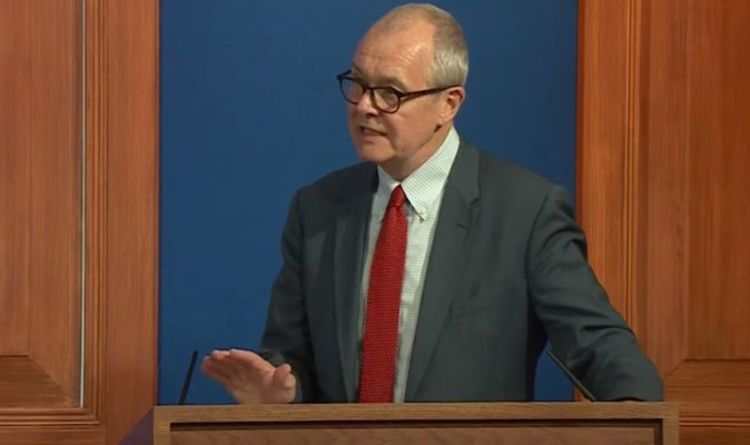 Sir Patrick said: “This is a virus that is going to be with us forever.

“If you look back and look at the increases we are seeing now in hopitalisations.

“If we did not have the vaccination we have got we would be looking at a question of is more lockdown needed.

“We are in a position now where we are in a race against the virus.”

He continued: “And the vaccines need to get ahead of it.

“And if you are in a race with somebody you do not suddenly assist them in putting the afterburners on so they can out-pace you.

“And so that is really what we need to do. And the four-week delay should reduce the peak whatever it would be by something between 30 and 50 percent.”

Sir Patrick’s comments come after the Prime Minister announced a four-week delay to the easing of restrictions.

Mr Johnson also warned there was always the possibility of a new variant derailing the process.

He said: “At a certain stage, we are going to have to learn to live with the virus and to manage it as best we can.

By July 19 there will be a “very considerable wall of immunity around the whole of the population”, the Prime Minister said.

He continued: “At that stage, on the basis of the evidence that I can see now, I’m confident that we will be able to go forward with the full Step 4, the full opening.”

But he added: “That, of course, does not exclude the possibility – I’m afraid, and we have got to be honest about this – the possibility that there is some new variant that is far more dangerous, that kills people in a way that we currently cannot foresee or understand.”

Mr Johnson said the Government will “monitor the position” every day and if the risk has diminished they will proceed to step four of England’s reopening.

He said: “We will monitor the position every day and if, after two weeks, we have concluded that the risk has diminished then we reserve the possibility of proceeding to step four, and a full opening, sooner.”

He said he is “confident” that no more than four weeks will be needed and that restrictions will not go beyond July 19.

Mr Johnson continued: “It’s unmistakably clear the vaccines are working and the sheer scale of the vaccine roll-out has made our position incomparably better than in previous waves.

“But now is the time to ease off the accelerator, because by being cautious now we have the chance in the next four weeks to save many thousands of lives by vaccinating millions more people.”

The delay of reopening came following the spread of the Delta variant which Mr Johnson said meant they “have obviously faced a very difficult choice”.

Mr Johnson said: “We can simply keep going with all of Step 4 on June 21, even though there is a real possibility that the virus will outrun the vaccines and that thousands more deaths would ensue which could otherwise have been avoided.

“Or else we can give the NHS a few more crucial weeks to get those remaining jabs into the arms of those who need them.

“And since today I cannot say that that we have met all our four tests for proceeding with Step 4 on June 21, I think it is sensible to wait just a little longer.”

But he said he is “confident” that July 19 will be a “terminal date, not a ‘not before’ date”.