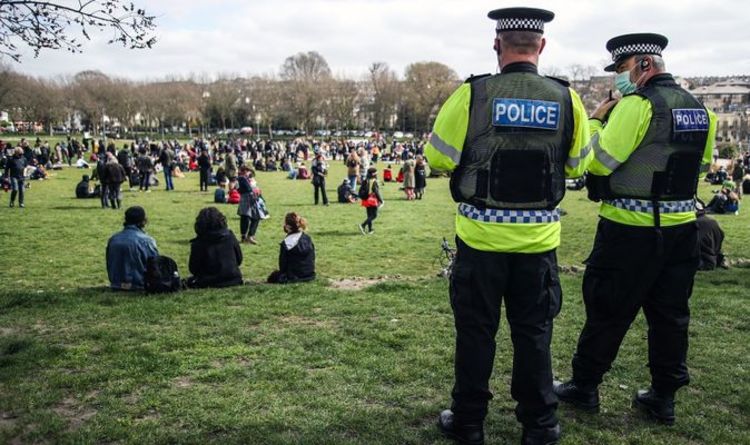 In the released footage, the couple appear to take money left for staff, after they reportedly demanded a refund on the food they had eaten, from the family-run Carats Cafe and Bar in Southwick, near Brighton. Staff shared the footage of the couple in a bid to identify them.

The staff described the apparent theft, which took place on Saturday, as “unfair and completely unacceptable”.

They also confirmed the couple had received a full refund after ordering two breakfasts which they complained were unsatisfactory.

Despite the footage being shared on social media, Sussex Police have yet to comment on whether charges will ensure and did not respond to MailOnline when asked if the couple would face charges for apparent theft.

Hours later, police smashed the windows of a car belonging to the same couple on the Brighton seafront after they left dogs in the boiling hot vehicle.

A policeman was seen using his baton to smash through the top of a back window to save the pooches as they sat in the car in the blistering 24C heat.

When the car alarm went off, the owner rushed towards it and began arguing with the police involved.

In a video of the incident, a woman standing with her family looking horrified can be heard saying: “You broke my window out.”

“The bloke obviously thought he was completely in the right. He didn’t really seem to have much empathy.”

Police regularly urge people to call them if they see a pooch in a hot vehicle because of this.

A statement from the police said: “Sussex Police were called about two dogs left locked inside a car in the heat of the day yesterday on Madeira Drive, Brighton.

“Police officers attended and tried to get a contact number for the owners of the car but were unable.

“Officers had no choice but to smash the side window to gain access and a kind member of the public donated a bottle of water.

“The owners were given strong words of advice on returning to the car a short time later.

“The dogs, who were much improved after fresh air and water, were left with the owners.

“Dog owners should never leave a dog alone in a car on a warm day.