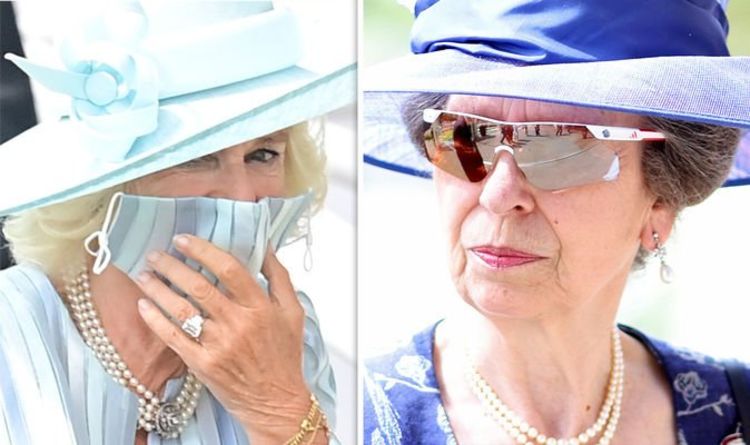 Princess Anne, 70 and Camilla, Duchess of Cornwall, 72, were among the first royals to attend Royal Ascot 2021 as the five-day event kicked off on Tuesday. While the racing festival is said to be Queen Elizabeth II’s favourite engagement of the year, she missed out on the first day due to hosting Australia’s Prime Minister Scott Morrison at Windsor Castle.

Camilla was photographed arriving at the racecourse with her husband Prince Charles, 73, and according to a body language expert, she looked “decidedly unsure and awkward” at the event.

Rather than wearing her facemask Camilla was snapped holding it over her mouth instead which made it hard for her to greet people, the analyst claimed.

“Standing alone and without her mask, Camilla appears to be wearing the slightly hunted or startled facial expression she wore soon after Diana died, suggesting some residue wariness when appearing in public might still affect her now that what would have been Diana’s 60th birthday is approaching.”

Camilla’s decision to hold her facemask rather than wear it over her ears suggests “social diffidence” and the Duchess employed “barrier” body language, the analyst claimed.

Judi said: “Camilla also seems to be struggling with her face mask.

“I thought I had seen all ways of wearing a mask, from over the eyes as Charles ended placing his recently, to below the nose or even below the chin, but to apply it to the nose like you’re sneezing into a hankie rather than hooking it over the ears is an odd gesture, especially as this mask looks beautifully crafted to match her coat.

“The hand over the mouth gesture to hold it in place must have made conversation and greeting rituals difficult, too.”

She added: “With her designer shades and with the matching pashmina thrown over one shoulder, this is probably the most fashionable Anne has looked in recent years.”

Anne’s expression appears to be tinged with sadness at the Queen’s absence from the event, Judi explained.

She added: “Her mouth is clamped tight and her stride is wide here, suggesting her enjoyment of the day might be tinged with sadness that her mother is not there to share it.

“Anne’s stylish and very royal colour-block look might hint that she’s taken on some of her mother’s duties for the day.”

The Queen’s daughter-in-law Sophie, Countess of Wessex, 56, was also spotted at the racecourse looking elegant.

The Countess was dressed in pale pink and wore a striking hat.

While the Queen missed the first day of Royal Ascot she is expected to attend later in the week.