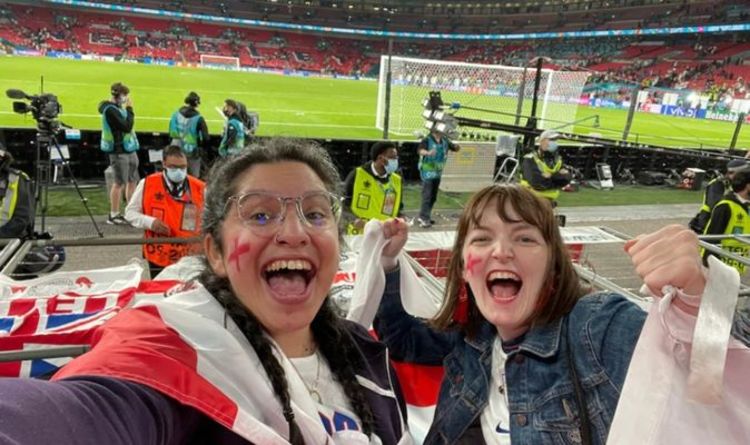 Nina Farooqi, 37, from Bradford, missed work after her friend offered her a last-minute ticket to the match on Wednesday. But the digital content producer, whose seat was right behind the goal, ended up losing her job when television cameras zoomed in on her celebrating England’s triumph.

Ms Farooqi told the Telegraph: “It’s mixed emotions: we’re through to the final, I’m still on that high, but I’ve also lost my job.”

She said she called in sick as she believed her work was unlikely to give her the day off due to being short-staffed.

Ms Farooqi, who described football as her “life”, got the train from Leeds to London Kings Cross at lunch time.

When she found out her seat was right behind the goal, Ms Farooqi shrugged off fears she could get caught in a 66,000-strong crowd.

But when she checked her phone at half-time she realised she’d been captured on camera celebrating England’s equaliser.

And she had even made it onto presenter Stacey Dooley’s Instagram.

Ms Farooqi said: “We were all over the news, my face was on every television screen across the world – I had friends from Australia and America telling me they’d seen me.

Ms Farooqi said: “They said they’d seen I’d been at the game, and I was honest about why I did it.

“But I didn’t get any sympathy at all and they said that’s it.

“That’s their call and the consequence of what I did.

“There is a bit of regret, no one wants to get fired, but then also I would have hated the regret of missing out.

The Three Lions roared to a 2-1 extra-time victory in the nail-biting semi-final.

Gareth Southgate’s men will now take on Italy in the final at Wembley on Sunday.