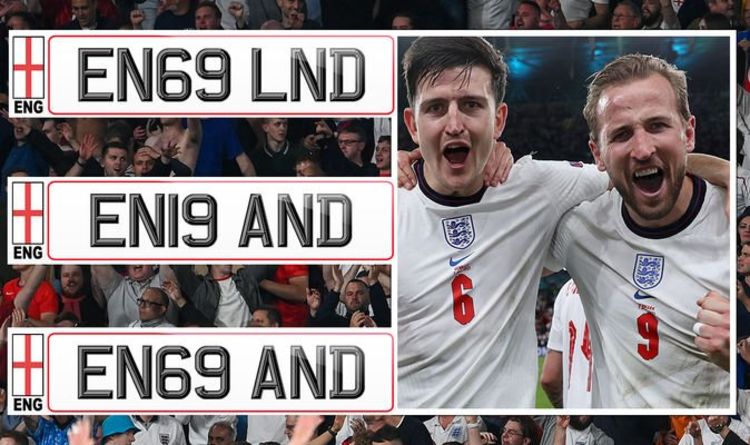 A personalised design could even be used to celebrate the occasion if England win their first major trophy since 1966 this weekend. Experts at National Numbers say they have had a “number of enquiries about England themed plates as the team progressed through the tournament.

Three England based designs are available from the number plate experts which mix letters and numbers to create an almost identical phrase.

David Edwards, Director of Operations at National Numbers said he had temporarily transferred a new plate onto his own car to celebrate the tournament.

He said there has been “lots of interest” in the new designs as fans were desperate to secure a new souvenir.

“So at the prices we have them advertised at, we’re expecting them to be snapped up as the excitement continues to build.”

National Numbers said the England plates have been “very popular” in past tournaments.

The designs will also be expected to have high resale value if England do manage to lift the trophy.

A survey from the DVLA found 69 percent of respondents would buy a personalised number plate because of a personal connection.

A total of six percent said they would buy a plate for business reasons with 17 percent keeping designs as an investment.

Drivers can get any combination fitted to a personalised number plate with prices starting from £250.

Horoscopes & love: Aquarius told love is ‘worth the wait’ amid week of ‘optimistic energy’

‘Streak-free’: Mrs Hinch fan shares the ‘best’ way to clean a TV screen with ‘no products’