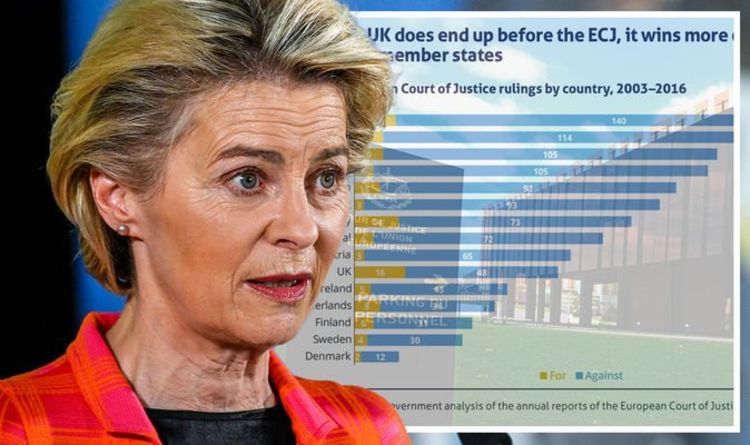 Ahead of the G7 summit in Cornwall, EU leaders said Prime Minister Boris Johnson must respect the “rule of law” by fully implementing the post-Brexit arrangements for Northern Ireland. Charles Michel, the President of the European Council, insisted the behaviour of the Prime Minister was of increasing concern. He said: “It’s paramount to implement what we have decided – this is a question of rule of law.”

Under the withdrawal agreement signed by Mr Johnson, Northern Ireland in effect remains in the single market and the EU’s customs code is enforced down the Irish Sea to avoid a hard border on the island of Ireland.

Brussels has complained that these arrangements are not being respected.

The EU has already accused the UK of breaking international law by unilaterally extending grace periods on a range of controls and border checks on goods entering Northern Ireland from Great Britain.

However, analysis from the Institute for Government shows the UK Government has actually been a consistently good international citizen, which meets its obligations under international law.

A graph included in the analysis also revealed that between 2003 and 2016, compared with other EU member states, the UK resolved its cases early, ended up in court less often than most, and won more often than most.

The report reads: “In general, the ECJ finds against member states more than it finds for them. However, the UK’s scorecard is better than most. In the period we examine, the UK has won 16 cases and lost 48, a ‘success rate’ of 25 percent.

“This is by far the highest success rate of any member state in our study, and the third highest of all 28 member states.”

“In interviews with the Institute for Government, UK lawyers argued that this is partly thanks to the high quality of UK lawyers.

“The UK’s marked preference for resolving

cases before court stage also means that the UK is unlikely to go to court unless the Government believes its case is strong.”

The report concluded: “The Government has consistently argued that the UK is a good international citizen, which meets its obligations under international law. The data indicate that this is right.

JUST IN: Emily Thornberry said UK food exported to Australia ‘will go off’

“These findings suggest that the UK would be economically well served by a robust and far-reaching system of enforcement for its future relationship with the EU.

“The better-behaved partner in any international agreement will benefit from having the other held to a high standard. However, the political imperative may be for a lighter-touch

It is not the first time Britain is called the “best-behaved EU member”.

In an exclusive interview with Express.co.uk, the chief executive of Maritime UK, Ben Murray, explained the reason why Britain never pushed for freeports before Brexit is because it was the “best behaved” member of the bloc.

He said: “The UK has always been the best behaved member of the EU, in terms of not pushing the boundaries

Mr Murray noted the Government often used the EU as an excuse.

He added: “That excuse is not there anymore, though.

“And yes, now that we are outside the bloc, there are areas where we can go further.”

The European Commission is referring France to the European Court of Justice (ECJ) over its failure to comply with an EU Directive.

The Commission is accusing French President Emmanuel Macron‘s government of failing to ensure that more than 100 cities and towns properly collect their wastewater.

The country should have been complying with EU laws on wastewater since 2005, more than ten years before Mr Macron took office.

But the Commission sent a letter of formal notice to the French authorities in October 2017 after a reasoned opinion in May 2020.

France is yet to adhere to the legislation.

The Commission said: “Although the French authorities have shared monitoring data aimed at showing compliance with the requirements of the Directive for some of the agglomerations initially identified, the deficiencies and gaps remaining therein lead the Commission to conclude that the authorities have failed to prove compliance for the above-mentioned agglomerations.”

The same fate is being reserved for Viktor Organ’s Hungary.

The Commission found 22 towns and cities with a population of more than 2,000 people in the central-European country in breach of the Directive.