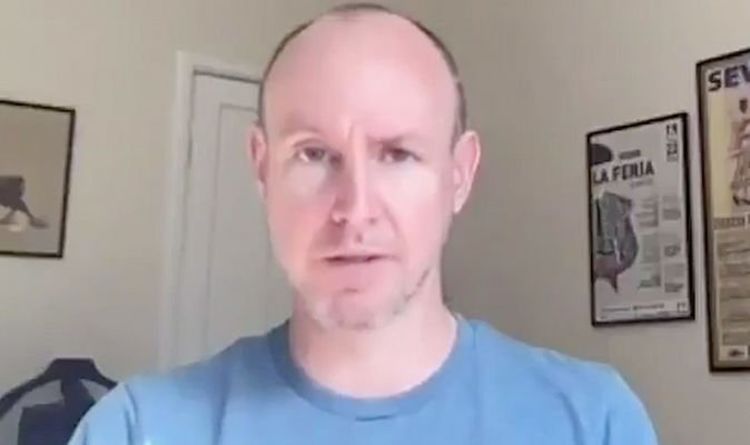 The European Union is using the Northern Ireland protocol to prevent the UK from being “competitive” and are exploiting the deal to “irritate” the British Government, a Conservative peer has claimed. Lord Hannan told talkRADIO’s Julia Hartley-Brewer that the current terms of the protocol section of the Brexit trade agreement were “unacceptable.” The protocol effectively keeps the country inside the EU’s single market and customs union.

The UK and EU have failed to reach an agreement on the protocol over the last week, with the EU arguing that chilled goods such as sausages should be frozen when being shipped from the rest of the UK to Northern Ireland.

Lord Hannan said that the EU was “trying to ensure that a post-EU Britain doesn’t become competitive and doesn’t do its own trade deals in a way that will outshine the European Union.

“It’s actually 0.0008 percent of the EU’s economy, but there is still a massive disproportion in how aggressively, belligerently it’s applying these checks.

“And it’s doing so because they see Northern Ireland as a sort of tender spot.

JUST IN: ‘Shame on you!’ London protest erupts as crowd swarms Downing Street in lockdown fury

“And all the time they’re saying ‘well all you have to do is agree to follow our rules in perpetuity.’

“What they call ‘dynamic alignment’ – we have to carry on doing whatever they did, and then 90 percent of these problems would go away.

The Northern Ireland protocol has proved hugely controversial, with tensions in unionist communities flaring up into violence in recent weeks.

DUP leader Edwin Poots has also said that he is in favour of removing the protocol.

Negotiations over the protocol overshadowed the G7 summit in Cornwall over the weekend, with European leaders insisting that the UK must compromise on its position.

US President Joe Biden reprimanded Boris Johnson’s government last week for its handling of the Northern Ireland protocol, and has said that the UK finding a compromise with the EU would be beneficial to securing a US-UK trade deal.