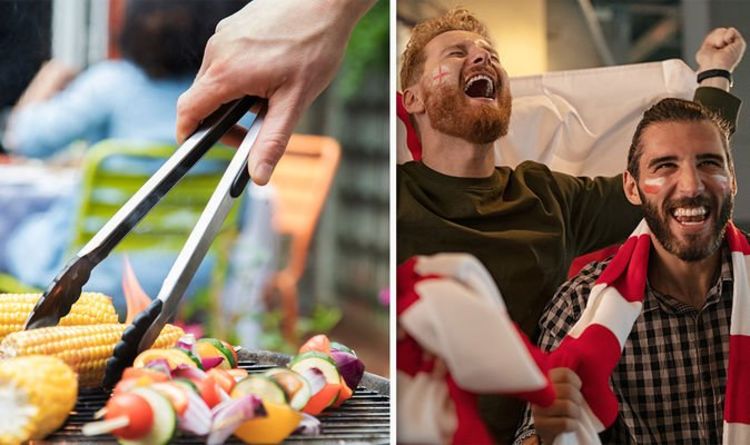 England has made it to the Euro 2020 final, facing Italy at Wembley Stadium on Sunday. Excited fans will be preparing to watch the historic game on Sunday night, whether that be at home, in the pub or at a dedicated outdoor venue. However, pub spots are quickly booking up, so entertaining at home may be the way forward.

One top choice for football fans could be to host a pre-match barbecue, with a range of delicious food to entertain friends and family.

And the weather looks to be holding out for the match, with cloudy but dry skies towards Sunday afternoon.

You could try your hand at making burgers from scratch, create some vegetable kebabs to cater to everyone or even make England flag cookies to commemorate the day.

Grab your England bunting, hang flags around the garden and get ready for an amazing day of football.

So here are some top barbecue recipes ahead of the Euro 2020 final.

In a large mixing bowl, place the ground beef, onions, garlic, salt, pepper and the bbq sauce. Mix well together, until the bbq sauce is evenly distributed through the beef.

Scoop a patty portion with your hands and roll into a ball, then gently flatten out to create a circular shape.

Cook the patties for 10 minutes on either side for a rare burger, or for at least 12 to 15 minutes for medium. While the second side is cooking, lay a slice of cheese on the patty so that it melts slightly.

Heat the burger buns on the bbq for no more than two to three minutes and spread the dijon mustard on the bottom bun.

Place the burger patty on the bun and add lettuce, tomatoes and onions. you can spread the chilli garlic ketchup on the top bun, or serve on the side.

How to make England flag bunting

On each piece of card draw a triangle to your desired size, you can either colour in the St George’s flag now (which may be easier) or after you’ve cut them out.

Cut out the triangle shape and using a hole punch, cut out two holes across the non-pointed edge at the top.

You can use this as a template to cut out the rest of your triangles and make sure to hole punch in roughly the same place on each.

Cut a length of ribbon or string, making sure to allow extra for tying knots between flags and the loops at the end.

Next, tie a loop at one end, and then at the non-looped end thread on your first piece of bunting, so that the correct side has a strip of ribbon running from hole to hole.

Then tie a knot in the ribbon/string at the back of the second hole.

Next tie another knot in the ribbon/string about one to two inches away from the flag.

Thread on your next flag, and tie a knot after it, continue until you reach the end.

Finally, tie a hanging loop at the end of the bunting so you can easily hang from whichever surface you choose.

For the ultimate celebration, have a go at making some St George’s flag biscuits.

Pre-heat the oven to 180C/170C Fan/Gas 4. Line two baking trays with baking parchment. Put the butter and caster sugar in a bowl and mix until evenly blended.

Stir in the beaten egg yolk. Sift in the flour and salt, then mix with a round-bladed knife until the mixture forms clumps. Gather the dough together with your hands.

Put the biscuits on the baking trays, leaving a gap between each one, then bake for 12-13 minutes. Leave to cool on the trays until hard then move to cool on a wire rack.

Put 75ml cold water in a bowl and add the royal icing sugar. Beat with a spoon for five minutes or until smooth. Spread over the biscuits using the back of a spoon and leave to set.

Decorate the biscuits with coloured writing icing – you can create the St George’s flag, write the names of your favourite England players or give the three lions badge a go!