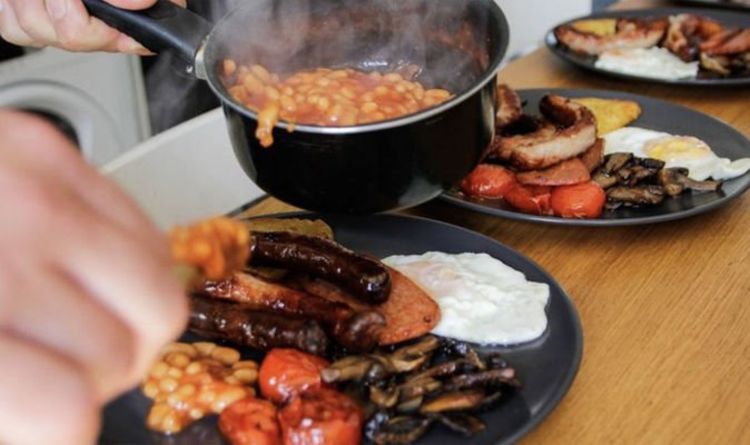 So luckily for you die hard breakfast fans, we have done the hard work and deciphered the exact timings to allow you to perfect your morning fry up.

How do you like your eggs in the morning?

Whilst the egg options are almost endless, scrambled, fried, poached, you need to make sure that you’re starting off of course with the items that will take the longest to cook.

Sausages, bacon and hash browns are up first. Despite them taking the longest, if you do happen to have a slight wobble with timings, they will happily sit in a low temperature oven for 10 minutes or so at their prime.

Vegetarian and vegan alternatives should run to a similar cooking time so feel free to swap these out.

Pop the bacon and sausages in the oven at 200°C / fan 180°C / gas mark six. Make sure to put the sausages in to the oven first (for about 20 minutes) and then the bacon about five minutes after (for 15 minutes).

Top tip – the streakier the bacon, the less likely it is to dry out, meaning it should become lovely and crispy.

We’re working on the assumption here that you’ll be reaching for the frozen hash browns that are ready to go in the oven. At the same time as the sausages, cook the hash browns on 230°C / fan 220°C / gas mark eight. These will need to cook for 18 to 20 minutes, turning them occasionally.

Next is where it could get a little confusing but if you stick to the timings, then things should go rather smoothly.

Mushrooms, eggs and tomatoes take similar amounts of time, around the five minute mark. When the sausages, bacon and hash browns have around five minutes left, this is when you should have the next three elements cooking.

Of course, making sure everything is prepped an additional five minutes before (when the meat and hash browns have 10 minutes of cooking time left) would be preferable.

Place the mushrooms stalk-side up on the grill plate and cook for one to two minutes before turning and cooking for a further two to three minutes. Try to avoid moving the mushrooms around when cooking as this releases the natural juices and can leave you with soggy mushrooms.

Place the eggs in a frying pan on a medium to low heat, adding olive oil to lightly coat the bottom of the non-stick pan. Cook until the tops of the white of the eggs are set but the yolk is still runny.

Place the tomatoes cut-side down on the grill plate and without moving, cook for two minutes. Gently turn them over and cook for a further two to three minutes until tender but retaining their shape.

You’ll then have about one minute spare before getting the beans on the hob for three to four minutes, making sure to stir them constantly. Alternatively, to be more time savvy, you could zap them in the microwave for around two minutes.

Now for toast, arguably the least exciting item on the menu, a full English however is simply not complete without a slice or two of perfectly toasted bread to serve as a base for your beans. This one hardly needs an explanation but 60 to 90 seconds in the toaster should do the trick.

After following the steps, all items should be ready at the same time and you should serve them immediately whilst they’re fresh, taking care of hot food and plates when little ones are around. Bon Appétit!

‘Hobbling along!’ Joni Mitchell, 78, in health update as she makes...

‘Hobbling along!’ Joni Mitchell, 78, in health update as she makes...