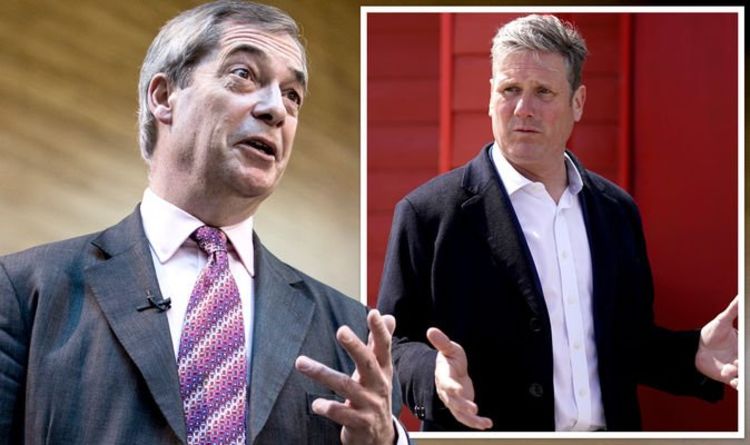 The then-UKIP candidate finished third in the Bromley and Chiselhurst poll, pushing Labour into fourth place for only the second time previously in a by-election since 1945. Mr Farage revealed that during canvassing in poorer areas of the constituency he was “stunned” by how many voters were “turned off” by Labour.

Writing in the Telegraph, he said: “The removal of another brick from the Red Wall last week in Hartlepool by Boris Johnson’s Conservative Party is dismal news for Labour.

“I say this because I find it hard to believe that this result will be reversed any time soon.

“These Labour voters will not go back in a hurry.

“While it is true that millions of Conservative voters switched to UKIP over the years, they usually lent us their votes for the European elections and then returned to the fold at the time of a general election.

Mr Farage’s analysis was echoed by many, including polling expert Sir John Curtice – who said the party’s silence over Brexit turned off many voters.

Sir John also insisted that the Labour Party’s post-Brexit strategy had failed as he slammed its choice of candidate in the Hartlepool by-election.

And hoping that once-loyal voters would simply return to the party now that Brexit was over was wrong, he said.

The polling expert remarked that this proved not to be the case for many voters.

Sir John said: “What is clear and frankly has been clear from the opinion polls throughout the last 12 months is that there is absolutely no sign at all of Labour making ground back against leave voters that they lost in 2019.

“Even when Labour was running at 40 percent in the polls last summer, yes their vote had gone up to a degree amongst leave voters but it went up by just as much amongst remain voters.

“In a sense, I think the challenge that we are seeing both in this by-election and in the local election is that Labour’s strategy for the last 12 months on Brexit has been to keep schtum in the hope that voters will move on.

“The truth is voters have not moved on and simply keeping schtum isn’t enough.”

Coronavirus signs: The 16 symptoms to report to the NHS if...

Bristol Zoo and Wild Place to close for a day to...

Coronavirus signs: The 16 symptoms to report to the NHS if...