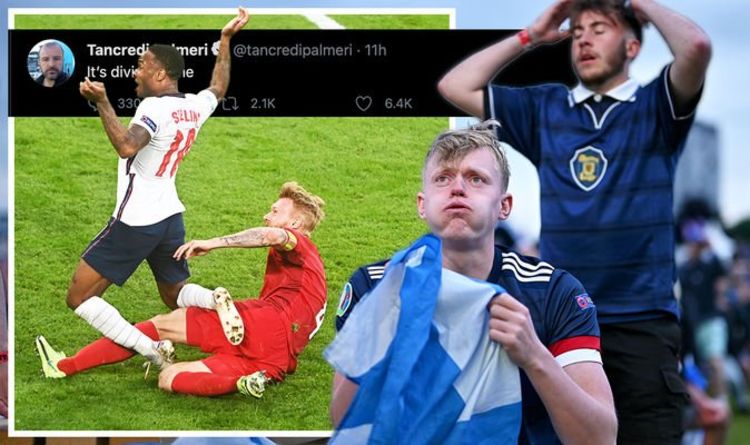 During a pulsating semi final match at Wembley Stadium in front of 60,000 fans on Wednesday evening, Gareth Southgate’s team beat Denmark 2-1 after extra time to spark glorious scenes throughout the country. England now face Italy in Sunday’s showpiece final. But the rest of Europe did not share in the jubilation, launching furious attacks against England and accusing them of being fortunate to reach the final. England’s winning goal came in the 104th minute, after Harry Kane fired in the rebound when his penalty was saved by Denmark goalkeeper Kasper Schmeichel.

However, the penalty has sparked a furious reaction after England forward Raheem Sterling was accused of going down too easily under the challenge from the Danish defence to win the spot kick. Tancredi Palmeri, beIN Sports correspondent former contributor for Italian newspaper Gazzetta dello Sport, tweeted: “It’s diving home.” The Scottish Metro led with the front page headline: “England dive into final.”

Denmark’s newspapers also expressed bitter disappointment at the heart breaking semi final defeat, with the Ekstra Bladet and BT tabloids leading their main stories on decisions from the referee believed had robbed their team of victory.

BT’s website ran with the headline: “Denmark was cheated”, while Ekstra Bladet’s ran with “Hjulmand furious”.

This was in reference to comments from Denmark’s manager Kasper Hjulmand, who hit out at the match officials of awarding the penalty, despite there being another ball on the pitch in the lead up to the incident.

The TV2 broadcaster quoted two refereed and a number of top managers from other countries who questioned whether the penalty should have been awarded to England as Sterling was accused of diving to win the spot kick.

In a poll on the broadcaster’s website, a huge 92 percent of respondents said England should not have been given the penalty.

Paul Hoi, UK correspondent for the Berlingske newspaper, wrote an opinion article expressing his distaste at the “strangely aggressive” celebrations in Central London.

The opinion piece was headlined: “Let the English party.

“They have nothing else, and rejoice instead that you have woken up in Denmark.”