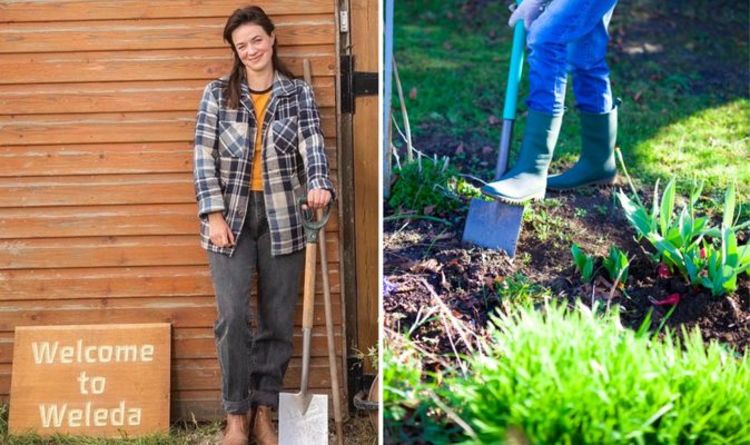 More people have been spending time in their garden this year than ever before as lockdown rules meant not being able to travel far from your home. Because of this, more Britons are also connecting to nature and wildlife through gardening and realising how beneficial it can be, for both their physical and mental health.

Frances explained why getting involved in Weleda’s campaign was important to her. She said: “I’m a big advocate for wildlife gardening and just generally increasing biodiversity and getting people outside.

“So when Weleda asked me if I’d be involved in their campaign, and knowing that sustainability is at the core of what they do, it was just something I really wanted to be involved with.”

Frances said that she believes more people have been gardening over the past year because “they have more time on their hands for the first time in ages”.

“With lots of people working from home, it gave everyone a bit of space to look at their hobbies and explore them a little bit more than they normally would.

“And I just think that gardening is such a great way of doing that, because it gets you outside.”

DON’T MISS:
10 of the best-selling garden essentials on Amazon [INSIGHT]
Alan Titchmarsh’s ‘key’ tips for growing herbs at home [TIPS]
When to water tomatoes – best time of the day [EXPAINED]

Frances continued: “For those of us who are lucky enough to have a garden, I think we’ve really felt the benefits of being outside in the fresh air.

“And for other people just you know, walking and engaging with mates, it’s been such a respite from the anxiety of pandemic and lockdown, and just a way if getting a bit of head space really.”

Frances highlighted the idea that gardening can help improve people’s mental health. She said: “I think gardening is great because it gives everybody a little bit of hope for the future. You put a seed in the soil and then you know that it’s going to germinate.

“And when you watch it grow, it’s a really reassuring thing. It’s really mindful.

“You’ve had that chance to be completely in the moment, but you’re also thinking about the future in a positive way, which can be hard to do when there’s so much bad news.”

Frances went on to explain that taking care of your garden doesn’t necessarily mean gardening in the traditional sense.

To connect with nature, you can leave your garden be, without doing much to it. And this also attracts more wildlife to your garden.

Frances said: “You can stop gardening for a bit, such as not cut the lawn as much and not weed as much and not tidy up as much, so that you’re creating lots of different habitats for nature.

“It takes the pressure off a little bit. So we can still have a garden without doing all these things that maybe seem really complicated and overwhelming when you’re new to gardening.”

However, Frances also shared tips on what to plant if you are a beginner gardener.

She said: “Some pretty good and useful plants, like herbs, are really fantastic because they’re so easy.

“So even if you’ve never done gardening before, stick a lavender in a pot, or a rosemary in a pot, and it’s probably going to be really successful. And then you can eat it as well.”

Another way to attract wildlife to your garden, according to Frances, is to increase the insect population.

“This involves not really digging the soil and leaving things like leaves that have fallen on the ground to stay where they are, so you can build a nice healthy soil microbiome. That will get the insect numbers up,” Frances said.

“A really good way of doing that is by building an insect house, so you can do that with piles of sticks or stones or bricks or pinecones. Or you can even get bamboo canes and cut them up and put them together.”

Attracting wildlife to your garden is beneficial to various species as they are currently struggling in the wild and their numbers in the UK have decreased. This is due to their habitats being destroyed to make room for crops or buildings.

As for planting in your garden, Frances explained that the best vegetables to start growing now in May are butternut squash, pumpkins, carrots, and parsnips.

The horticulturist said that sowing these seeds are “so easy” because all you need to do is “dig a little trench, stick them in, and they will germinate after giving them water”.

“Make sure that they stay nice and watered until they [the seeds] start to show above the soil. And then, hopefully, you can leave nature to do the rest,” Frances added.

‘They’re pretty similar’: How Kate and Meghan co-ordinate at events in a key way