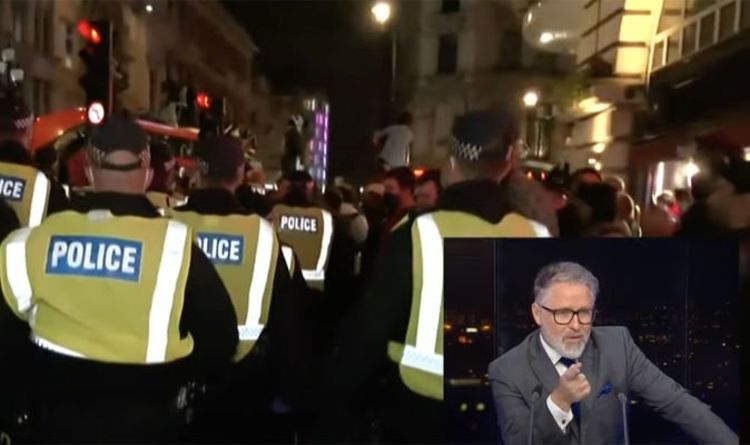 France24’s host Mark Owen remarked that the “only people wearing face masks are the police” as he watched footage of England football fans celebrating last night. England secured a historic 2-1 win over Denmark last night in the Euro 2020 semi-finals. The victory sees England reach its first-ever Euro 2020 final, where they will play Italy at Wembley on Sunday.

France24’s Sport Editor Simon Harding said: “It’s a been a long time for both of these teams.

“These are two teams who have shown a lot of heart, a lot of passion, this never-give-up attitude and it’s all in store for a cracking game.”

Mark Owen interrupted: “I’m just looking at the images coming in from London.

“The only people wearing face masks are the police!”

JUST IN: Scottish shoppers lash out as England song played in Tesco after win

He then appears to hint at a spike in Covid cases, adding: “That says something about what might happen next.”

The victory over Denmark prompted frenzied celebrations into the night for England fans.

Some supporters even climbed on top of a double-decker bus in Leicester Square.

Traffic came to a standstill at Piccadilly Circus in central London when fans blocked streets and climbed on telephone boxes.

Business secretary Kwasi Kwarteng said the government could not “guarantee” that Wednesday’s victory would not lead to a spike in transmission.

More than 60,000 supporters packed in Wembley last night to watch the game.

One medical expert, Dr Christina Pagel, said there is “no doubt” that Covid cases in England will spike because of the Euro 2020 final

Imperial College London scientists have estimated that infections in England are doubling every six days at present.