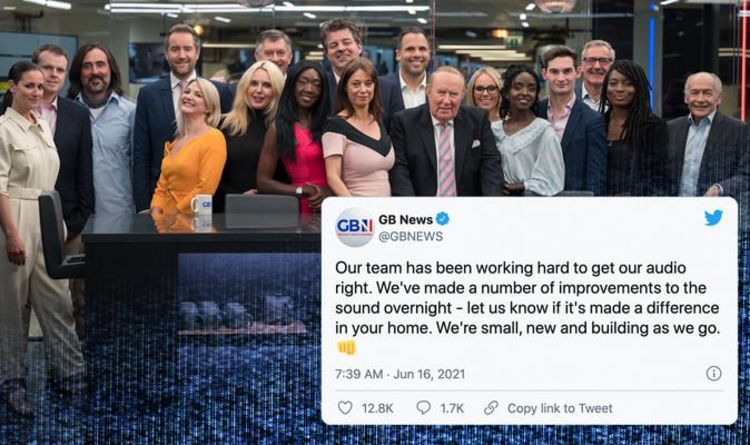 GB News wants to know whether viewers can hear any enhancements in its audio quality today after “a number of improvements” were made to its sound overnight. Viewers have flooded social media with complaints about the sound quality of the new channel, which started broadcasting from 8pm on Sunday. The sound issues, which resulted in muffled audio from some presenters and echo-ing sets in other shows, weren’t restricted to a single telly platform as viewers on Sky Q, Freeview and Virgin Media voiced complaints.

It’s clear that GB News is listening to its audience. Jumping on social media to update its viewers about its progress, it posted: “Our team has been working hard to get our audio right. We’ve made a number of improvements to the sound overnight – let us know if it’s made a difference in your home. We’re small, new and building as we go.”

Based on the response on Twitter to the latest update from GB News, it’s difficult to work out whether the latest changes made a huge difference to viewers. Some seemed to think the changes overnight had improved the quality of the sound on their telly – “Much improved today thanks,” one praised the GB News team – while others didn’t seem to think the worse offenders had been nixed – “I think its more in sync, though theres still issues with the mics and bad background noise occasionally sounding like a drill or plane,” one commented.

However, there are still no shortage of issues for the fledging channel to address, based on the feedback from its viewers.

“Just need subtitles next for those that are deaf / hard of hearing,” one social media user replied to GB News’ tweet about sound issues. Another common complaint is the lighting in the studio, which many believe is too drab or gloomy.

“Get the lighting and the sets done next,” one viewer commented. Another echoed the complaint, writing: “Sounds is a lot better. Your set is still far too dark – loose the black panels and light it more. Maybe it’s that black desk? Outside broadcasts look really good though.”

“The sound is better – sometimes echoey in the studio and the OB sound has improved. I’m enjoying the programming, however, as a viewer, the sets are too dark and drab. I also think there should be hourly news bulletins through the day,” one Twitter user posted.

It’s been a rocky start for GB News. As well as the widespread complaints about the quality of the broadcast and the lack of any High Definition option for those watching on Freeview, unlike BBC News and Sky News, which both broadcast in HD for Freeview TVs and set-top boxes, the channel has also seen a number of high-profile advertisers pull the plug.

Cider firm Kopparberg, IKEA, Nivea and Octopus Energy have withdrawn their advertisements from playing on the network this week. Swedish flatpack furniture firm IKEA says it had “not knowingly” advertised on GB News, something that Kopparberg echoed in its statement about the decision to drop the news network.

Headquartered in Paddington, in central London, GB News is fronted by veteran broadcaster Andrew Neil, who also helped launch Sky News. In an opening monologue when the channel started broadcasting, Neil said the channel was designed to not be “another echo chamber for the metropolitan mindset that already dominates so much of the media.”

Rather than following the news agenda, GB News is modelled on the format that has enjoyed huge success on Fox News. Presenters host their own shows in regular timeslots and it’s these “appointment to view” shows that bring the audience – not a rush to find out what is happening in the news at any exact time. Although there is a rolling ticker tape along the bottom of the screen with the latest headlines, there are no news bulletins or regular weather forecasts on GB News.