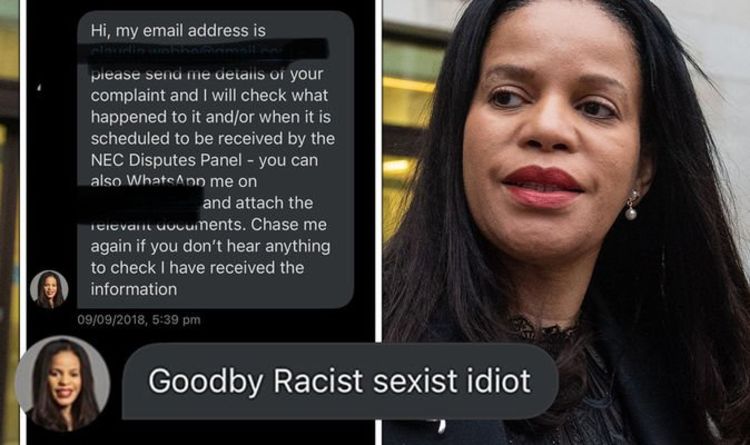 Claudia Webbe – currently suspended from the Labour Party as she awaits a harassment trial – allegedly sent abusive messages to several users before blocking them last night. It came after she was left red-faced for asking an “embarrassing” question on the UK Government’s plans to intervene in Belarus.

Many Twitter users commented on a video showing the toe-curling exchange with Foreign Secretary Dominic Raab.

At least four are said to have received direct private messages from the MP for Leicester East.

In one she reportedly called the user an “idiot”.

She then allegedly wrote: “I do not take abuse from anyone.”

He told Express.co.uk: “I’d simply made a comment criticising her questioning of Dominic Raab – asking why we didn’t take ‘legal action’ against a dictatorship which, clearly, doesn’t care much for laws regardless.

“I was just quite surprised. It certainly isn’t professional.

“You wouldn’t expect her to send abuse randomly towards people.

“It’s also quite damning towards some parts of politics.

“I wasn’t offended, but when you see elected MPs casually abusing people, it sets a message of leading from the gutter, and could result in other people going further and becoming seriously abusive.”

The independent MP asked Mr Raab: “Why does the Government not consider legal action to be necessary in the case of Belarus?”

Mr Raab replied: “What is the legal action that you’re proposing?”

Ms Webbe continued: “Well, I’m asking you the question. Does the Government consider legal action to be necessary at all?”

The minister continued: “Sorry, what I was trying to clarify is who do you want us to sue and where?”

The MP for Leicester East appeared to struggle with an answer.

One wrote: “To be fair, we’ve all made fools of ourselves at various times.”

Another added: “Never ask a question you don’t understand.”

A third person said: “That’s embarrassing, imagine getting your *** handed to you by Raab.”