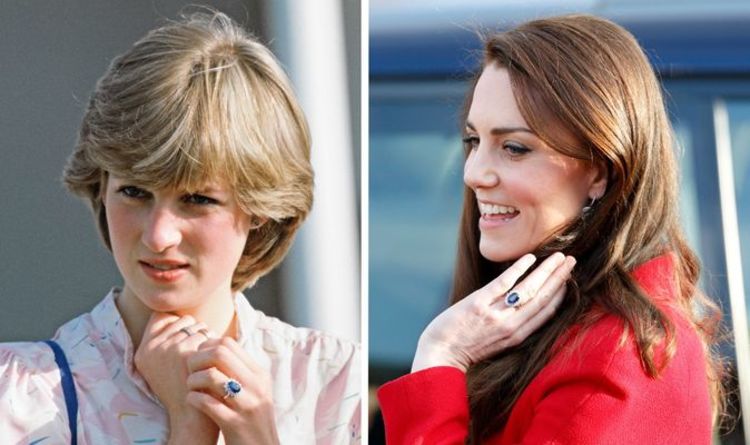 Kate Middleton joined the Royal Family in 2011 when she wed Prince William at Westminster Abbey. Before the big day, William gave Kate a special engagement ring – the one that belonged to his mother when she was alive.

Much has been said about Kate Middleton’s engagement ring in the past.

An iconic and sentimental piece of jewellery, it features a rare oval-shaped blue sapphire and is thought to be worth hundreds of thousands.

But what does this style unveil about the ring and the ring’s wearer?

She said: “The oval shape is a timeless choice of gemstone cut and has been seen in jewellery for centuries as its ‘egg shape’ was originally symbolic of fertility and rebirth, making it a fitting choice for couples who have been through a previous break-up.

“The modern symbolism is of family and harmony, which, along with the versatility of the shape, makes it the ideal cut for a modern couple.”

Claire continued: “The contemporary cut of the oval shape still retains all of the brilliant facets that you would get with a round cut, but allows flexibility with the proportions to elongate and slim the fingers with a longer profile, proving to be a very flattering style.

“Choosing this classic style as an engagement ring shows that the wearer keeps with tradition, but likes to mix it up with individualism and flair.

“This individuality can also be shown with the use of accent diamonds to really make this classic cut unique.”

The jewellery expert also explained the meaning behind the sapphire itself, saying: “An engagement ring featuring a coloured gemstone also portrays the wearer’s individuality.

“The history of coloured gemstones is rooted in symbolism which started with the Romans believing that the ring finger on the left hand has a special vein, which runs directly to the heart.

“Therefore, by choosing certain coloured gemstones they believed you were inviting different energies into your life.

“For example, a blue sapphire is said to symbolise power, strength and kindness.”

Claire added: “This is a fitting statement for Princess Diana and the Duchess of Cambridge.”