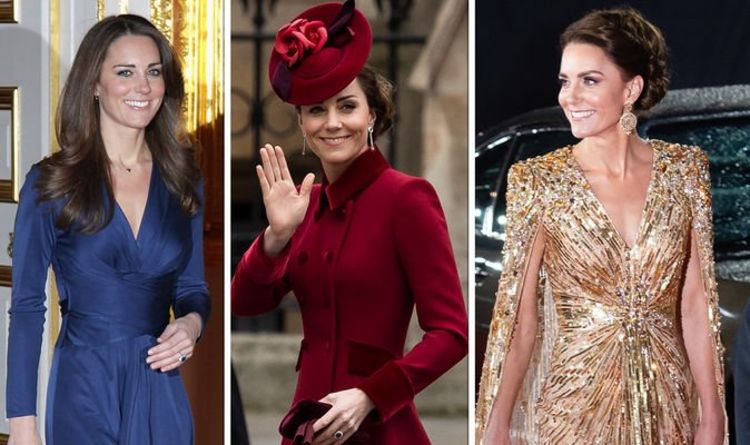 Whenever the Duchess of Cambridge steps out, her outfits are always a source of great interest to the public. With Kate now considered a global style icon, her outfits are known to sell out in a flash after she’s spotted wearing them. Over the last decade, Kate has been pictured in everything from casual sportswear to elegant ballgowns, and she certainly knows how to dress for any occasion.

Prince William had been dating his university girlfriend Kate Middleton for several years before they announced their engagement in 2010.

The beaming couple appeared in the apartments of St James’s Palace to announce their happy news, and Kate was a vision in a navy blue wrap dress for the important occasion.

The photocall marked Kate’s first official foray in the world of royal fashion, and the dress by fashion brand Issa sold out soon after it was debuted by the future Queen.

Kate and William wed the following year at Westminster Abbey, and Kate’s beautiful lace gown has gone down in history as one of the most iconic royal wedding dresses of all time.

“Kate has always had a rather classic style and has often opted for British independent brands (Jenny Packham, Alexander McQueen, Mulberry, Emilia Wickstead or Catherine Walker, to name a few) or high street retailers (such as but not only LK Bennett, Marks & Spencer, Topshop, Zara, Asos, Whistles or Boden).

“Her style has always been very consistent with either high-end or affordable pieces whether for her wardrobe or jewellery choices (making her more relatable) for daytime business or public engagements and more demure for evening events (with long pencil skirts, high neck shirts, simple yet elegant floor-length dresses).

Comparisons have often been drawn between Kate and another famous royal lady when it comes to her sense of fashion.

Kate likely has some of the biggest fashion brands offering to dress her in their latest styles.

But the Duchess often opts to recycle her timeless outfits for more than one occasion.

Ms Laudort explained: “She has grown more comfortable with her style at the end of the decade and has shown interest in more sustainable choices and by recycling outfits and wearing them more than once.

“[For example], she attended the first-annual Earthshot Prize Awards wearing a stunning floor-length purple Alexander McQueen gown which she previously wore in 2011.”