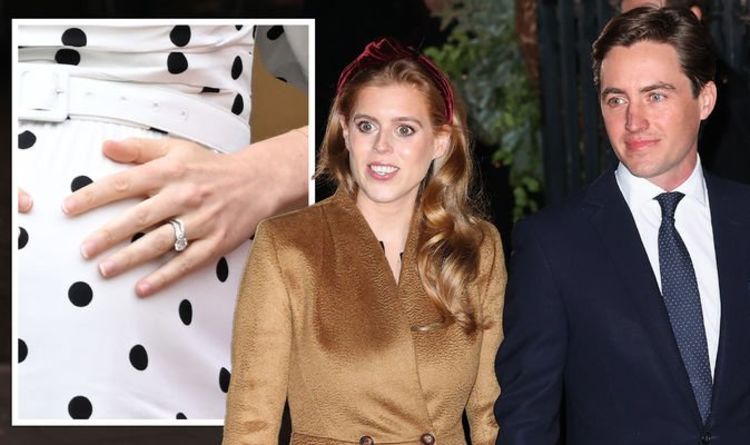 Prince Andrew and Sarah Ferguson, the Duchess of York, announced the engagement of their eldest daughter Princess Beatrice in 2019. Beatrice and Edoardo Mapelli Mozzi got engaged while on a trip away in Italy. And adorably, Edoardo put his own stamp on his engagement ring and wedding ring for Beatrice by helping to design them.

How did Princess Beatrice’s wedding ring break with royal tradition?

Parallels can be drawn between Beatrice’s engagement ring and the Queen’s iconic diamond ring from Prince Philip.

But the fact Beatrice’s engagement ring and wedding ring came as a platinum pair can be seen as a break from royal tradition.

Traditionally, royal brides have opted for a Welsh gold wedding ring when they’ve tied the knot in recent decades.

But Beatrice’s wedding ring was designed to match her engagement ring, so the wedding band is platinum rather than gold.

“The round diamond shoulders two tapered baguettes, which gives the ring a vintage feel and Art Deco-inspired look. For added sparkle, the ring also features small pavé diamonds halfway around the band.

“From the images, it’s clear the diamonds are VVS grade, which means they have minuscule inclusions that are difficult even for trained eyes to see under 10x magnification. The diamonds look flawless.

“Thanks to its royal legacy, this will no doubt increase in years to come.”