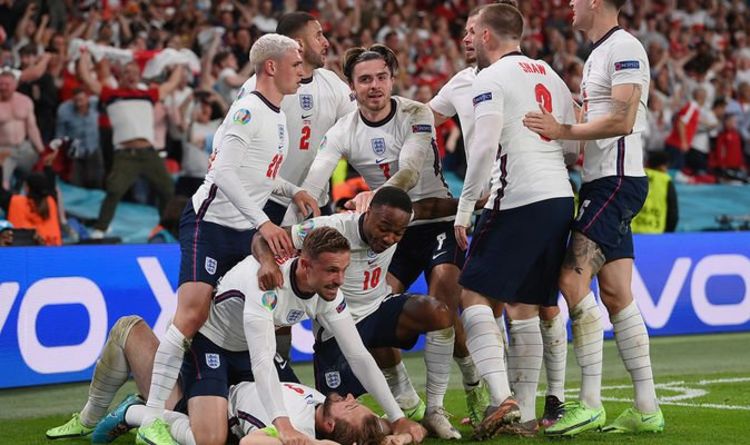 Last night, England had a historic win against Denmark at Wembley when they made their first major tournament final since the 1966 World Cup. England have now secured their place in Sunday’s match against Italy and, should they leave victorious, would snatch their first World Cup victory in 55 years.

To show support for the team ahead of the final, the UK’s national newspapers have filled their pages with images of last night’s momentous win.

Scenes of elation that erupted in the stadium after Harry Kane’s extra-time penalty kick dominate the press today, as this was the moment that secured the Three Lion’s place in the final.

The Daily Express leads with a souvenir edition for football fans who have been desperately waiting the day they could see England in a final, with the headline sharing this sentiment: “And finally… Happy and Glorious: England’s time has come”.

The front page shows the team emotionally piling onto Kane after the win, with the back noting that “it’s nearly home now” alongside an image of jubilant Kane and Phil Boden.

The Daily Mirror also used an image of the elated England team on top of each other, with “finally” written in large letters alongside a headline saying: “Harry and his heroes beat the Danes… now to match the England immortals of 1966”.

The Daily Mail went with a picture of Kane raising his fist in the crowd at full-time, as well as a smaller picture showing some elated England fans.

Its headline made a pun out of not being able to believe the win: “’Kane Believe It! On night of high drama, Three Lions keep millions on edge of their seats… then Captain Harry fires us into historic Wembley final”.

Its headline honoured the millions of fans who have been waiting for this day for so long, saying: ‘England’s dreaming. Now final awaits for first time since ’66.”

The Sun wrote that watching the victory was “the best feeling in the world” and celebrated the joy of getting to see England in a final.

The Telegraph branded the players “the history boys” and used a picture of the England team on top of each other as they celebrated their victory.