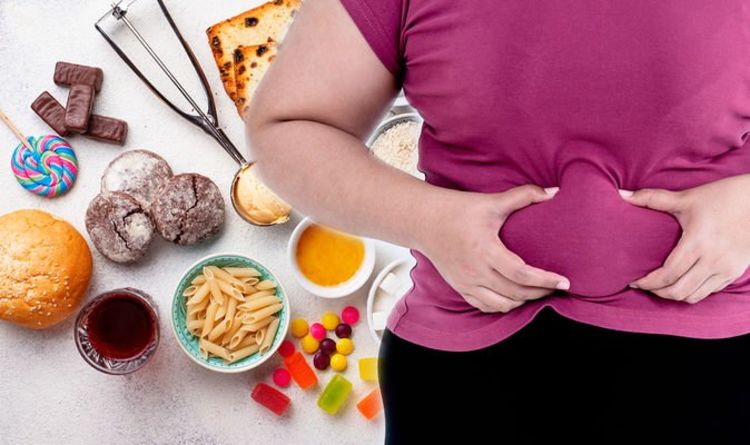 Visceral fat, or belly fat, lurks within the abdominal cavity, which houses vital organs such as the liver and intestines. The disastrous consequences of accumulating fat in this region includes hampering insulin production that leads to type 2 diabetes and contributing to heart disease risk. Belly fat loss is easier achieved when reducing the number of foods which are notorious for increasing insulin resistance in your diet, including these four.

Ice cream can increase belly fat in a few ways.

“A pint of ice cream could have up to about 1,000 calories, and for some people, that’s more than half their daily intake,” said dietician Edwina Clark.

She added: “That means if you keep up that habit, it could result in some pretty hefty weight gain.”

In a study published in the US National Library of Medicine National Institutes of Health, a refined high carbohydrate diet and the changes on the serotonin pathway and visceral fat were investigated.

Consumption of palatable foods high in refined carbohydrates has been implicated as a contributing factor to the epidemic levels of obesity, noted the study.

It added: “Such foods may disrupt appetite regulation in the hypothalamus through alterations in hunger and satiety signalling.”

The study delved into how refined carbohydrates could induce obesity due to the modulation of serotonin and dopamine signalling.

The study used rats with visceral fat percentage being used as a measure of weight gain during the trial.

The study found that after 29 weeks, the rats on the refined carb diet showed a significant increase in visceral fat.

It was also noted a higher level of triglycerides was found in the refined carb group with an increase in circulating lipids in the blood with a distorted serotoninergic signalling.

Consumption of palatable foods high in refined carbohydrates has been implicated as a contributing factor to the epidemic levels of obesity, noted the study.

Dementia: One simple activity may reduce your risk of cognitive decline