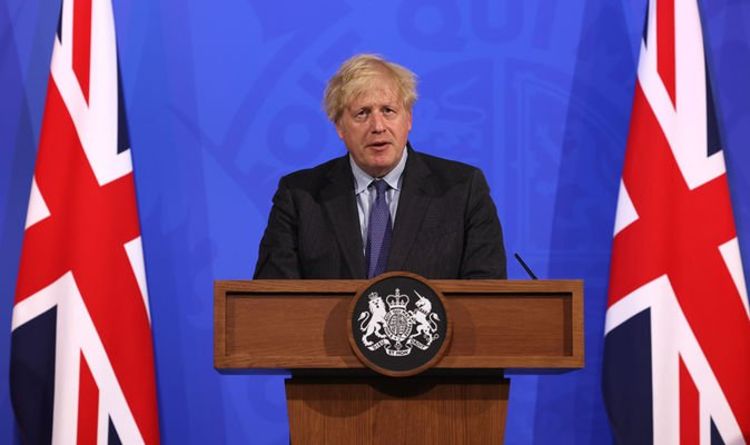 Boris Johnson previously said that he wanted as many Covid restrictions lifted as possible after June 21, though earlier this week postponed Britain’s reopening date to July 19 because of fears over the Delta variant. According to a memo, seen by Politico, life may not return to the normal we remember next month as had been planned – with face masks and working from home among the restrictions likely to remain in place.

As a result of the so-called “Freedom Day” being postponed, several reviews on restrictions such as social distancing and face masks have been pushed back as well.

Final decisions on what life will look like after July 19 will be made before Britain moves into step four of the government’s roadmap out of lockdown.

However, leaked documents have revealed one of the potential reopening plans on the table.

These include giving Britons and businesses more flexibility in deciding whether or not to work from home or go back to the office in the future.

Face masks are also likely going to remain in some settings long term, such as on public transport where they assist with preventing the spread of COVID-19 in confined and poorly ventilated spaces like train carriages.

There will also probably be a form of border controls and isolation in place similar to what Britain has now, given the threat that new variants could pose to normality.

Sources in the cabinet office stressed that the document is one of several potential options, as nothing is signed off or anywhere close to being announced.

READ MORE: NHS set to be given green light to use revolutionary Covid drug

It said: “There is currently very little consideration of airflows when positioning screens.”

The Government confirmed that there are “no current plans to legislate on ventilation standards” – though updated advice on this was published in May.

Insiders confirmed that no final decisions should be expected before mid-July as it is “too early to say” where the country will be by then.

A spokesperson for the Government said: “We have paused at Step 3 for up to four weeks due to the new Delta variant, and we will continue to assess the latest data on this variant over the coming weeks.”