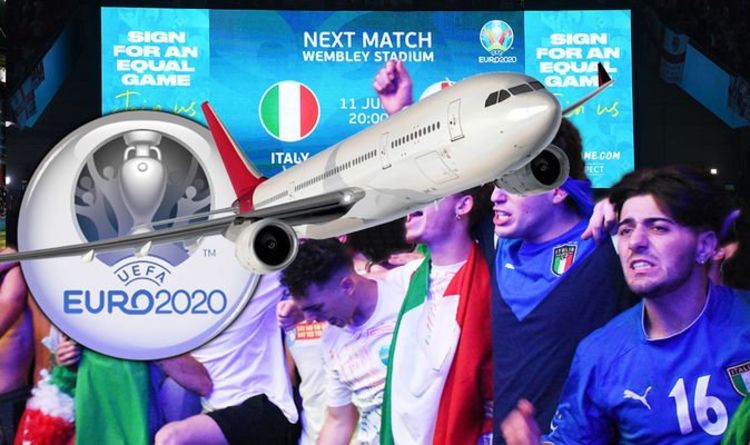 They will join the 6,500 Italian expats allowed into the final in being drowned out on Sunday by scores of England fans lucky enough to be in the ground to roar on the Three Lions. Italy’s football federation announced that its extra supporters would be allowed to travel to the match on special flights. They will be allowed to ignore the UK’s coronavirus quarantine rules and spend no more than 12 hours in the country.

A spokesman for the Italian Football Federation said: “It will be like a corridor between Italy and the UK, with about five laid-on flights and Uefa selling the package of flight and match ticket.”

The fans will sit together in a special bubble inside the stadium and only travel on dedicated transport to and from the airport.

Under the UK’s normal rules, the Azzurri’s faithful would have had to quarantine for 10 days on arrival in England.

Italian scientists have warned the supporters may walking straight into a Covid cluster amid growing concerns over the Delta variant.

The decision to pack in 60,000 fans into Wembley for the European Championships final has been hugely controversial, with Italian premier Mario Draghi calling on Uefa to move the match.

Travelling Italian supporters will be forced to self-isolate on their return for five days after their 12-hour trip.

Additionally, they must return negative coronavirus tests before and after their journeys.

Italy’s football federation is charging £525 for the roundtrip.

The Italian media firmly believes their team will be bringing home the trophy, thanks to what they claimed to be a lucky England victory against Denmark last night.

“A payback would be logical. We may be thinking bad thoughts, we may be sinners, but better that than be a fool.”

It added: “In a competition made to fit for England, it is not surprising that it was an extremely generous penalty that launched Gareth Southgate’s group to its first final in 55 years.”