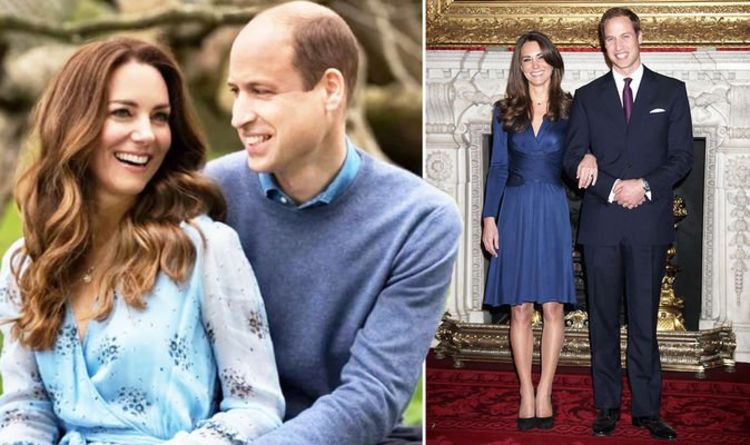 Kate Middleton and Prince William were recently commended for sharing a lovely photo to mark their 10 year wedding anniversary. In the picture taken at their home, both royals wore a blue ensemble.

Kate’s sapphire and diamond engagement ring could be clearly seen in all of the pictures released.

This is not the first time the parents-of-three have matched in blue outfits, however.

They have favoured blue looks for themselves as their children over the years.Following the birth of their first child Prince George, both wore blue to step outside the hospital.

Most notably, Kate wore a long-sleeved blue wrap dress when the couple announced their engagement in 2010.

The royal blue dress had long sleeves and was by Issa.

Speaking exclusively to Express.co.uk, Personal Stylist at Your Fashion Lounge Georgia Michalopoulou explained why the Cambridges may have reached for the colour in their latest pictures.

She said: “First of all, they both look amazing in blue!

“It’s a colour that really suits them, and it matches beautifully with the background of their anniversary picture.”

By choosing to wear blue 10 years ago, Kate may also have given a nod to Princess Diana’s engagement.

When Diana and Prince Charles gave their engagement interview, the Princess of Wales wore a royal blue skirt suit over a white blouse.

Kate may have kept this in mind when styling herself for her own engagement shoot.

“Their choice of colour is definitely a nod to their colour choices when they announced their engagement but also a nod to William’s mother who also wore blue on the announcement of her engagement with Prince Charles,” Georgia added.

Prince William gave his wife the engagement ring which once belonged to Princess Diana when he proposed.

The jewel has a central sapphire surrounded by 14 diamonds set on white gold.

Kate is rarely seen without the blue jewel and the sentimental value behind her ring could encourage her to match her ring in style choices.

The expert concluded: “And also, let’s not forget the engagement ring.

“Beautiful sapphire that belonged to Princess Diana which later William gave to Kate when he proposed.

“So, the colour blue for William and Kate has definitely a sentimental value to them and their relationship. And it suits them too!”