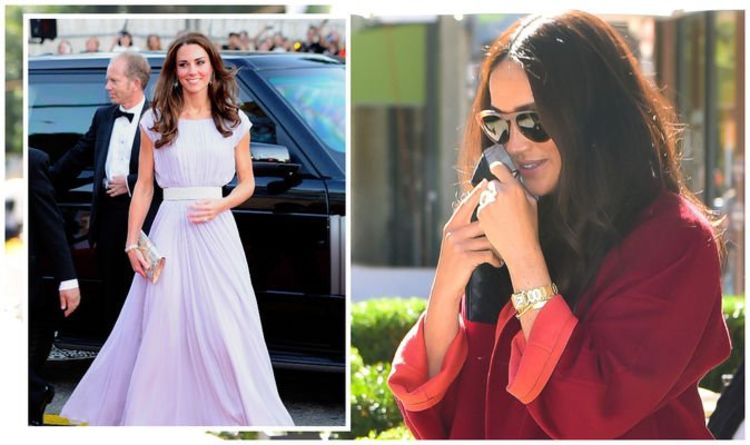 Meghan Markle, 40, was born and raised in California in America by her mother Doria Ragland, 65 and her father, Thomas Markle, 77.

After moving to the UK officially in 2018 when she married Prince Harry, 37, she moved back to the USA in March 2020.

Kate Middleton, also aged 40, was, on the other hand, born and raised in Berkshire, England and still remains a working member of the Royal Family.

Her main residence is Kensington Palace in the heart of London which she shares with her husband Prince William, 39, and their three children, Prince George, eight, Princess Charlotte, six, and Prince Louis, three.

So who has the bigger impact on fashion overseas in America?

A spokesperson for Karen Millen told Express.co.uk: “The results found that Kate, with over 9,200 searches per month for her style last year, is the clear winner.

“With her iconic gold dress at the James Bond premiere, there’s no wonder she reigns over all the others.”

Throughout 2021, Kate was most searched for by people in the USA and she also had 453 articles written about her fashion choices.

This involved 17 articles written about the Princess’s fashion and 6,518 social engagements.

Sophie, Countess of Wessex trailed behind the Princess of York with 100 searches for her style.

The Countess had just five articles written about her style in America and 192 social engagements.

In final place was Princess Anne.

The Princess Royal had just 10 searches for her style in the USA, with 37 articles written about her and 4,601 social engagements.

‘It feels like part of the family has gone’ Pensioner’s WW2...

‘Angry’ students call for ban on sale of school uniforms in...

Royal Mail confirms staff shortages due to Covid-19 are reason for...

‘It feels like part of the family has gone’ Pensioner’s WW2...