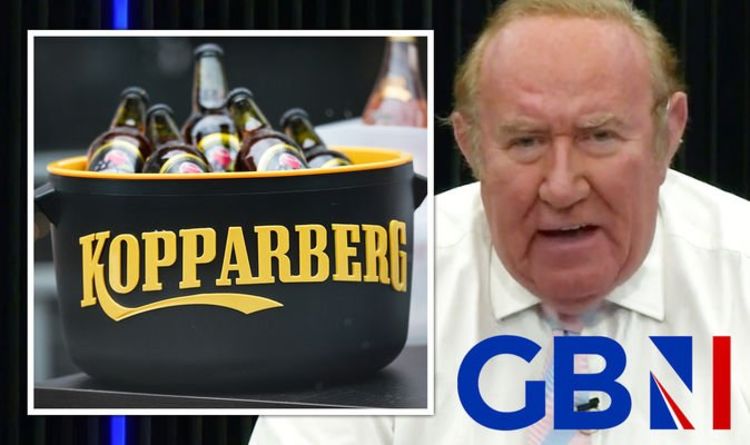 Former BBC stalwart Andrew Neil launched his new GB News Channel this week, with the promise to “lend an ear to some of Britain’s marginalised and overlooked voices”. TV industry magazine Broadcast reported yesterday that GB News peaked in its opening minutes on Sunday with 336,000 viewers – outperforming the 100,000 viewers who watched BBC News across the hour and the 46,000 who tuned into Sky News. However, Kopparberg quickly issued a statement after realising its advert was broadcast on the channel “without knowledge or consent”.

The statement from the popular Swedish brand, which makes fruit ciders, said: “Thanks for bringing this to our attention.

“We want to make it clear to everyone that our ad ran on this channel without our knowledge or consent.

“Kopparberg is a drink for everyone and we have immediately suspended our ads from this channel pending further review of its content.”

The comment sparked a furious backlash on social media, with many people warning they would now boycott the alcoholic drinks brand.

“Time to boycott their sugar-packed ciders. Any brands that cower to the Twitterati deserves to pay the price.”

Comedian and author Geoff Norcott added: “OK, well Kopparberg is no longer a drink for me.”

Another person wrote: “Big mistake Kopparburg. You are now boycotted.”

It comes after Mr Neil warned about “cancel culture” as he opened his first show with a monologue explaining the ways the channel would be different from other news outlets.

He said: “We will puncture the pomposity of our elites in politics, business, media and academia, and expose their growing promotion of cancel culture for the threat to free speech and democracy that it is.

“We are proud to be British – the clue is in the name – and while we will never hold back from covering our country’s many flaws and problems, we will not come at every story with the conviction that Britain is always at fault.

“We won’t forget what the ‘B’ stands for in our title.”

However, Sky News host Kay Burley suggested that the channel would still not compete with its rivals.

But this prompted Ms Burley to reply: “We plan to.”

The aim is to rival the other news and current affairs channels, such as the BBC and Sky.

A social media user praised the new venture as they said: “Great to see Andrew back and what a great show, GB News.”

Another added: “Watching Andrew Neil show on GB News He really is a cut above every other current presenter.

“He just does the basics…plays Devil’s advocate very well,”

Express.co.uk has contacted Kopparberg for a statement.