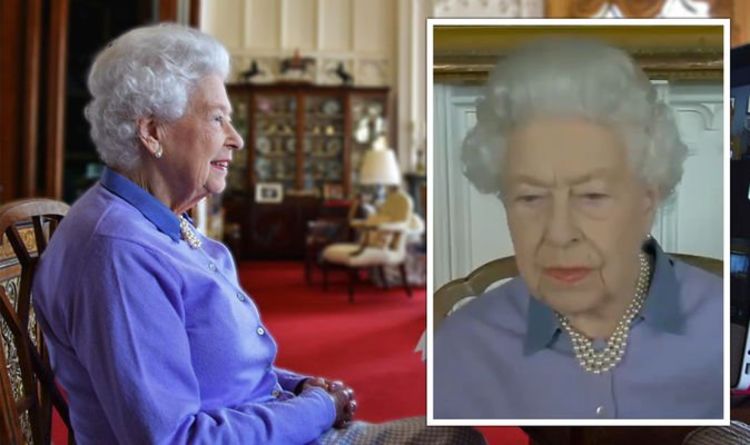 Queen Elizabeth chatted to members from the charity through a video link as the monarch sat in her usual wooden chair. Some fans noticed that the monarch didn’t add a brooch to her outfit today, something out of the ordinary for Her Majesty.

Another wrote: “She looks so chirpy today, I’m so glad.”

“Any colour suits her doesn’t it,” a third Tweeted.

For jewellery, the monarch went for her favourite earrings and three-strand pearl necklace.

They have been worn by the Queen so many times over the years that they are now considered part of her uniform.

“The Queen has favoured pearls since her wedding day to Prince Philip, Duke of Edinburgh in November 1947 when she wore two very special strings.

“These wedding gifts from her mother and father had a unique provenance; one had belonged to the last Stuart monarch, Queen Anne, and the other to Queen Caroline, the wife of King George II.

“The royal wedding began a fashion for short single or double pearl strings, and while previously ‘Grandmother’s pearls’ had been largely the preserve of the rich and powerful, imitation and cultured ‘real’ pearls made the style available to all.

“While fashions have changed, the Queen has retained her own style and continues the tradition of wearing pearls every day as her mother and grandmother did before her.”

However, the Queen also went for a look without one of her brooches today.

The monarch has a huge brooch collection and almost always adds one to her outfits, even when chatting via video link.

Taking to Twitter, one person wrote: “Shame not to see her style any brooches today.”

Another replied: “Maybe it is placed lower down and cut off due to the camera angle.”

One other royal fan said: “She went for a casual outfit, it didn’t need any jewels.”

Prince Harry’s body language with Camilla was ‘impeccable’ – now ‘all...