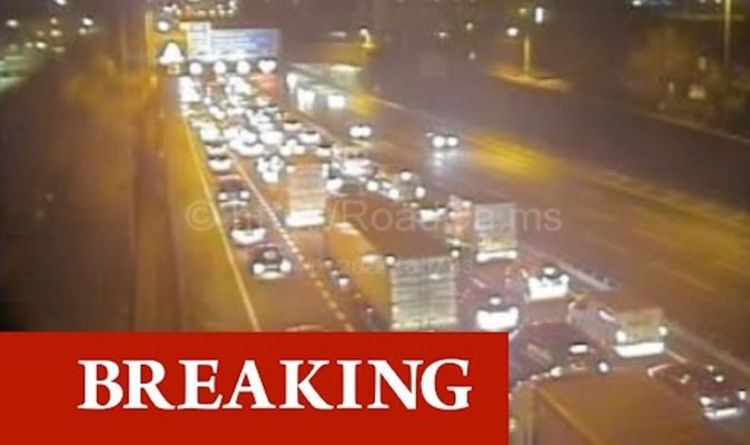 Traffic continues to build up as traffic officers attend the scene of the collision. The crash happened between Junction 24 for Potters Bar and Junction 25 for Cheshunt on the M25.

Traffic was been stopped in the anti-clockwise direction at the Hertfordshire stretch of the motorway.

Traffic was then allowed to pass on just one lane of the carriageway.

Highways England warned motorists of the delays, providing a later update on the flow of traffic and remaining congestion.

They posted: “Traffic has now been released on the #M25 anti-clockwise in #Hertfordshire between J25 (#Cheshunt) and J24 (#PottersBar).

“However 3 lanes (of 4) remain closed at this time.

“There’s just over a mile of congestion on approach, but this is likely to increase quickly.”

Drivers are warned not to expect long queues to quickly dissipate.

Traffic monitoring website MotorwayCameras logged the incident as an “accident” and cautioned drivers about the congestion on the road.

They said: “There are three of four lanes closed.”

The site predicted that normal traffic flow will not resume for a number of hours.

Nabbed by his leg tattoo! Bungling burglar caught out by very distinctive design