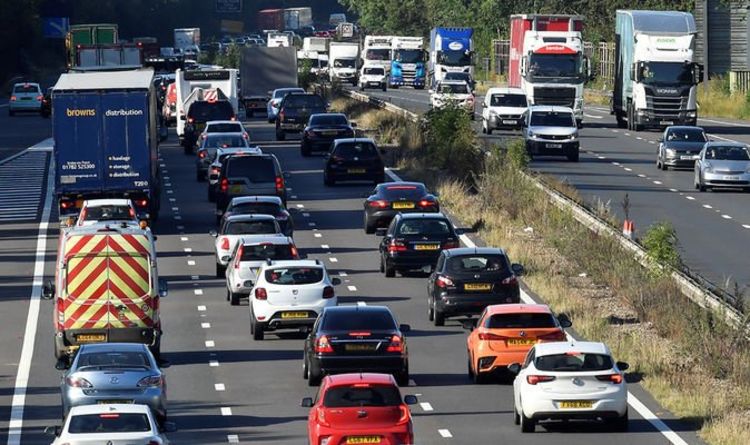 Both directions on the M6 are closed between J20 for the M56 link and J19 for Knutsford, Cheshire, after the crash on the southbound carriageway. One lorry overturned in the horrific accident, believed to have happened at around 1pm.

Diversions are in place but will add up to one hour to journey times, Highways England says. Southbound motorists are being redirected onto the M56 at junction 20 near Lymm, Cheshire.

But drivers on the northbound carriageway face stationary traffic from junction 18 for Holmes Chapel, which as Liverpool Echo reports, is an eight-mile stretch.

Authorities have warned drivers to remain in their vehicles if they are stuck in the bumper-to-bumper jam.

North West Motorway Police tweeted: “Emergency vehicles are still responding to the incident on the M6 between J20 & J19.

“If you are held in the queue please remain with your vehicle. Being on the opposite c/way or h/s is not safe for you & delays crucial equipment getting to the scene.”

The nature of any injuries is unclear at the moment. Two air ambulances are, though, reportedly at the scene.

Cheshire Police are also present and tweeted to warn drivers delays will be likely for some time.

A spokesperson said: “The M6 in Cheshire is currently closed in both direction following a serious collision near Knutsford.

“The incident, which involves three HGVs, was reported at around 12.40pm today, Thursday 8 July. The collision is on the southbound carriageway and as result of the incident the road is currently closed in both directions between junctions 19, Knutsford, and 20, Lymm Interchange.

“Local diversions are in place but motorists are advised to avoid the area if possible. Further details will be released when available.

“Anyone with any information or video footage in relation to the collision is asked to call Cheshire Police on 101 or visit www.cheshire.police.uk/tua quoting IML 1032250.”

Highways England tweeted: “Please be aware there are long delays on the #M6 northbound between J18 and J19 due to the ongoing collision.

“There is approx. 8 miles of congestion which is likely to add around 50 mins onto usual journey times.”