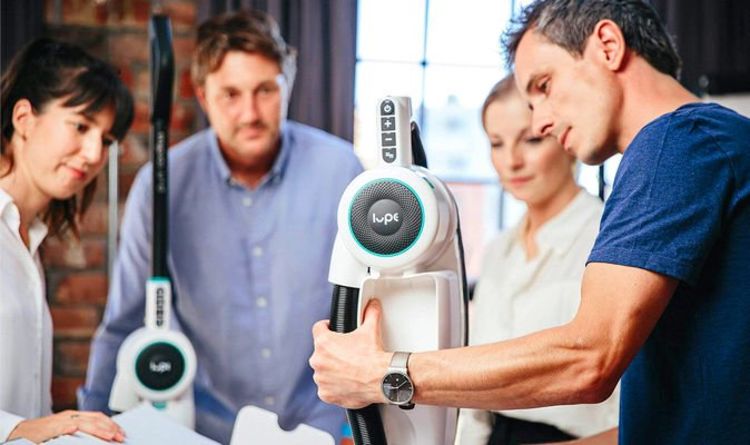 When it comes to cordless vacuum cleaners, Dyson is comfortably the market leader. In recent weeks the company, founded by entrepreneur James Dyson, has announced a new vacuum kitted-out with a laser to highlight dust and grim that’s invisible to the human eye. However, a pair of ex-Dyson engineers hope to disrupt the British brand with their own take on the cordless cleaner.

Lupe Technology, which is headquartered in Chipping Sodbury in South Gloucestershire, was founded in 2015 by a former research manager and engineer from Dyson’s Malmesbury base in Wiltshire. The first vacuum cleaner to launch from the new start-up is called the Lupe Pure Cordless.

Most manufacturers, including Dyson, design their cordless cleaners around a handheld unit. This can be used to vacuum carpets and hard floors, while still being light enough to use to clean hard-to-reach places like stairs, car seats, and behind the back of sofa cushions. The only issue with this design is that all the gubbins – battery pack, motor, dust bin – have to be in your hand. This can make these designs a little heavy, or, in models with lighter batteries, reduce the amount of cleaning you can get done between recharges.

To solve this, the Lupe Pure Cordless opts for an upright design. As a result, from a distance, the Pure Cordless looks closer to its corded predecessors than rival cordless handheld gadgets.

But while it might not look as futuristic, there are some real advantages to this design. First of all, you don’t need to drill a hole for a specially designed holster to support and recharge your cordless vacuum. Since it’s able to free stand, it can be stashed in any cupboard or corner.

Second, since you don’t need to support the weight of all of the most important components in your hand at all times, the ex-Dyson engineers have managed to find room for a one-litre dust bin – so you won’t have to keep dashing back to the bin to eject your grim mid-clean. For comparison, the £599 Dyson V11 Absolute packs a 0.7 litre dust bin.

Of course, the upright design of the Pure Cordless also allows for a bigger battery, which Lupe says will keep vacuuming for 60 minutes between recharges. Thankfully, Lupe hasn’t skimped on suction power to achieve that impressive battery life either. According to the company, its new vacuum can provide “up to 10x” more useful suction compared to rival designs.

The Pure Cordless uses a HEPA filter, which Lupe says captures 99.99 percent of fine dust and allergens in your home as you clean. Helpfully, you won’t need to replace that filter either, since it can be washed with cold water and popped back into the vacuum between cleans.

Lupe offers a two-year guarantee on its Pure Cordless cleaner, which retails for £699, but is currently on-sale for around £569.

Speaking about the company, co-founder Pablo Montero said: “A lot of people ask me if I find our competitors like Dyson formidable. The easiest rebuttal to that is they were all like us at one point. and they were ultimately successful. I think certainly with something like a vacuum cleaner, because everyone has got one, there’s room for everyone. Although we are Dyson and Shark as competitors, actually for our business to be successful, we don’t have to be bothering them at all in terms of their businesses. Whilst it is one of those things where you could get hung up about what could happen actually the reality is it’s all fair and it’s all medical. I wouldn’t be doing this if I wasn’t risk averse, you just take it in your stride.”

BBC One The Green Planet: Sir David Attenborough had to do a ‘penguin dance’ to keep warm whilst filming in the Arctic

Bradley Stoke reacts as McDonald’s and Starbucks to open drive-thrus at...

Omicron: The uncomfortable symptom that can linger even after recovery

Bradley Stoke reacts as McDonald’s and Starbucks to open drive-thrus at...

Omicron: The uncomfortable symptom that can linger even after recovery