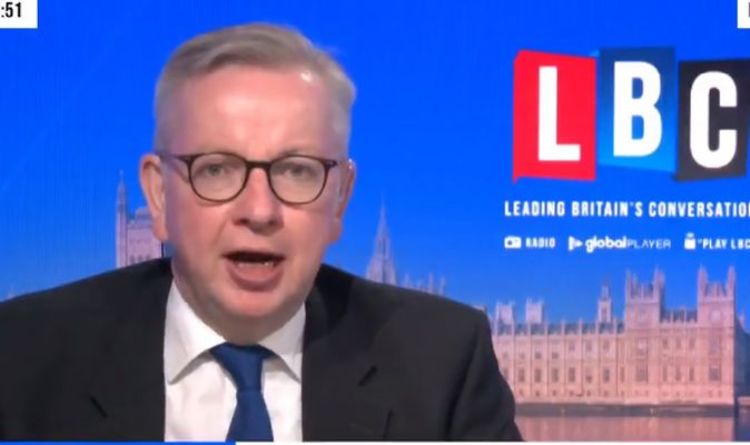 Michael Gove has admitted that the Government could be forced to delay the lifting of lockdown measures again in the event of a “bizarre” event impacting the UK vaccination rollout. Mr Gove was speaking a day after Boris Johnson announced that the planned national reopening on June 21 was being pushed back by a month. LBC host Nick Ferrari grilled Mr Gove on the government’s new timeline for the easing of stage four restrictions.

Mr Gove told LBC: “There are significant freedoms that we enjoy at the moment but obviously we want to lift as many restrictions as possible.

“I hope then and I am confident that we will be able to move to stage four and a far far greater degree of freedom.

“Now it might be the case that there is some bizarre unprecedented event.

“But all the pointers all the data, all the evidence suggests that we can with confidence expect that the number of people vaccinated by July 19 will be sufficient to allow us to open up fully.”

It comes after LBC Nick Ferrari asked the minister: “Can you tell us that it will be a month and then after that date in July we can cry freedom Mr Gove?”

On Monday Prime Minister Boris Johnson announced the planned June 21 lifting of coronavirus restrictions was being delayed for four weeks.

Under stage four of the Government lockdown roadmap, the lifting of all health measures will now take place on July 19.

Mr Gove had previously spoken with confidence that the Government would be able to meet the June 21 date.

“We did want very much to be able to have more restrictions lifted on the 21.”

“But this Delta variant has proved a particular problem.

“And we are taking just a little bit of extra time to make sure that more people are vaccinated.

“Before opening up further.”