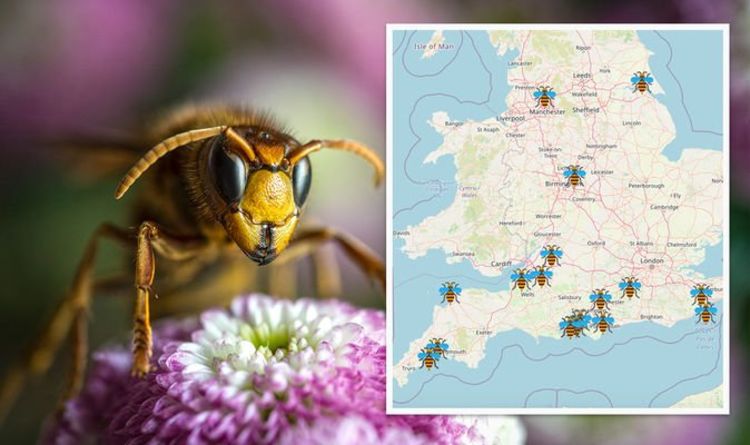 Each year reports of Giant Hornets flood in during the summer months, with the deadly winged insects attacking colonies of honey bees and wasps. Vespa Velutina nigrithoras, also known as Giant Hornets and Murder Hornets, can be up to two inches long and have a potentially fatal sting which can cause anaphylactic shock in humans.

Giant Hornet venom may not always lead to death but can cause pain, swelling and kidney failure.

As the name suggests, Asian Hornets are indigenous to Southeast Asia and are of concern as an invasive species in some other countries like the UK.

Giant Hornets targeting bees and wasps is extremely detrimental to both the agriculture industry and the already dwindling population of bees worldwide.

Now Brits are being asked to help identify Giant Hornets across the country, and report their sightings on a dedicated map.

You can do so via this website here, with a quick form to fill in to give details of the sighting.

This includes questions on the area, the colour and size of the insect and whether you’ve spotted a nest.

Kate Fromings from WhatShed.co.uk, said: “Although we advocate for the kind treatment of all animals, the spread of Giant Hornets is not something that should be taken lightly.

“As well as the very real danger they pose to humans, swarms of so-called Murder Hornets can decimate a colony of honeybees in a matter of minutes, putting our crops and farms at risk if they are able to invade the UK successfully.

How did Asian Hornets get to the UK?

According to the RSPB, Asian hornets were inadvertently brought to France in 2004.

The most likely way was in a shipment of goods imported from east Asia.

Since arriving in France, the species has spread rapidly.

Asian Hornets, known as Giant Hornets – are now spotted across France and regularly seen in nearby countries.

There has been a record high for this time of year with 63 hornets sighted in the UK.

In Jersey, 63 queens have been spotted with just 25 of these trapped.

Alastair Christie, Jersey’s Asian hornet coordinator said: ‘We are on track to surpass 2019 numbers, but trapping in 2019 was minimal and we are also a lot better at it now.

“So with the increase in trapping and the help from the public it stands to reason that we would find more.

“I am hoping that we have caught a greater proportion of the queens this year and that the number of nests won’t be as high.”