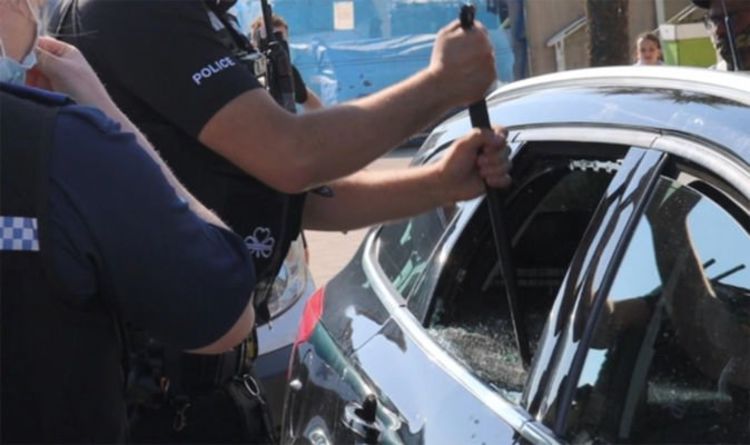 The car was parked on Brighton seafront on this weekend, when temperatures soared across the country. A policeman was seen using his baton to smash through the top of a back window to save the pooches as they sat in the car in the blistering 24C heat.

When the car alarm went off, the owner rushed towards it and began arguing with the police involved.

In a video of the incident, a woman standing with her family looking horrified can be heard saying: “You broke my window out.”

In response, an officer said: “It’s a hot day. You shouldn’t be leaving the dog in the car in this weather.”

In the background, numerous beachgoers enjoying the sunshine can be seen watching the chaos unfold.

“Police officers attended and tried to get a contact number for the owners of the car but were unable.

“Officers had no choice but to smash the side window to gain access and a kind member of the public donated a bottle of water.

“The owners were given strong words of advice on returning to the car a short time later.

“The dogs, who were much improved after fresh air and water, were left with the owners. Dog owners should never leave a dog alone in a car on a warm day. If you see a dog in distress in a hot car, dial 999.”