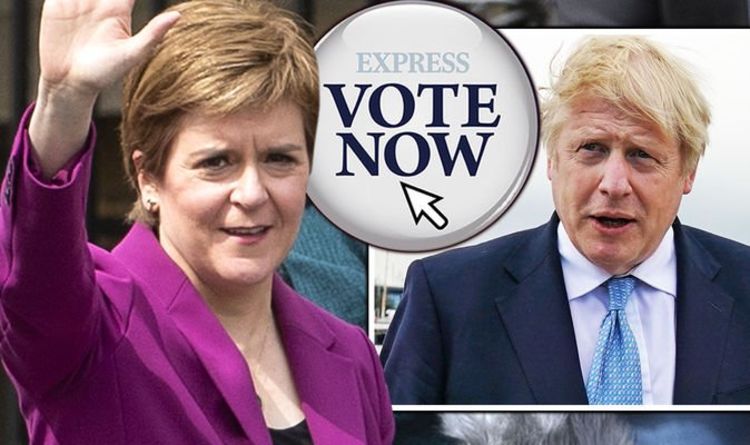 After the SNP emerged victorious by returning 64 MSPs to the Scottish Parliament Ms Sturgeon and Mr Johnson are set for collision course over the independence referendum. With the aid of the Scottish Greens there will be a pro-independence majority in the Holyrood chamber. The First Minister of Scotland on Saturday evening argued the country should be able to decide on the constitutional question of the nation’s independence from the UK, “when the time is right”.

Now Mr Johnson has organised a summit with the devolved administrations of the UK to tackle the crisis.

The Prime Minister in an interview with the Daily Telegraph last week said “a referendum in the current context is irresponsible and reckless”.

He added: “I listened to the Scottish election carefully.

“My impression was that the SNP moved away from the idea of a referendum, and I think very wisely.

“Because I don’t think this is anything like the time to have more constitutional wrangling, to be talking about ripping our country apart, when actually people want to heal our economy and bounce forward together.

Boris Johnson, in a letter to Ms Sturgeon, argued the UK was “best served when we work together.

“I think a referendum in the current context is irresponsible and reckless.

Ms Sturgeon has said that she will press for a second independence referendum after the nation has dealt with the coronavirus pandemic.

Speaking on The Andrew Marr Show, the First Minister of Scotland said: “I will work with the Prime Minister and anybody in the interests of Covid recovery, of course I will.

“I have done it all through the last year.

“I also want to be in a position where our decisions around the Covid recovery long-term are not dependent on decisions Boris Johnson takes.

“Because I guess at some point we will find out that takes Scotland in a direction we don’t want to go in.”