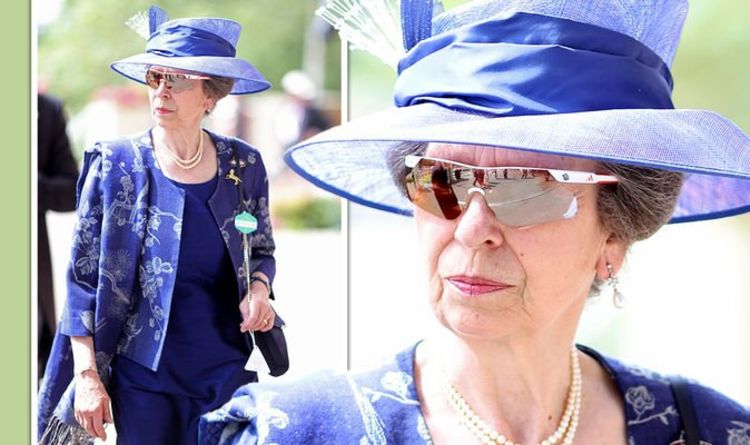 Princess Anne arrived at the racecourse this afternoon to mark this year’s Royal Ascot. Members of the Royal Family turned up in cars this year rather than their usual carriages due to Queen Elizabeth II not being present for today’s event.

Royal Ascot 2021 kicked off today after last year’s event was cancelled due to the pandemic.

The five-day event has formed part of the second phase of the Government’s Event Research programme, with a capacity of 12,000 guests on each of the days.

Unlike usual, the royals turned up in cars this year with members including Prince Charles, Camilla, Duchess of Cornwall, Zara and Mike Tindall as well as Princess Anne.

For the first day of the event, Princess Anne opted for a navy outfit.

Princess Anne added a pair of drop pearl earrings to the look, with a matching two-strand pearl necklace.

The royal often favours pearls and has added them to her looks for many events.

Her mother, Queen Elizabeth II also wears the jewellery nearly everyday, with them becoming part of her royal uniform.

The prestigious horse racing event has a very specific dress code and in line with tradition, female guests wear stunning hats or headpieces.

One person said: “Yay Princess Anne is here, she looks quite stylish.”

Another wrote: “Classic look from Princess Royal, she likes her dark colours.”

“So far I am loving the royals outfits, they don’t mess around,” said a third on Instagram.

The Duchess arrived wearing a pale blue summer coat with different tones of blue striped down it.

The royal added a matching mask to the look along with a pale blue hat.

B12 deficiency diet: The divisive condiment that is FULL of vitamin...