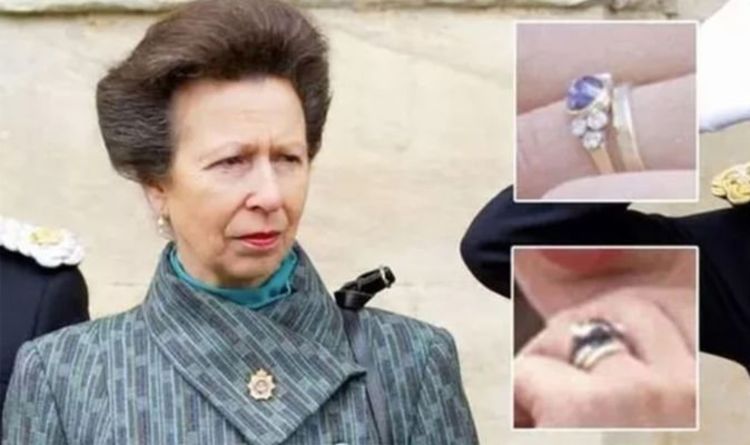 Members of the Royal Family will often accessorize their outfits with timeless pieces of jewellery. Princess Anne does not wear a lot of jewellery but will often don her engagement ring.

The sapphire was surrounded by diamonds and set on yellow gold, 77 Diamonds head of bespoke Anna Buyers explained.

The expert said: “The first engagement ring, given by Mark Phillips, features a cabochon cut blue sapphire of about two carats.

“Cabochon cut gems have a smooth, rounded finish and are not faceted, giving a soft, silk-like feel to the stone.

“The cabochon gem is framed by a cluster of three small diamonds either side totalling approx 0.2 carats, set in yellow gold.”

Princess Anne and Mark separated in 1989 and she naturally no longer wears the ring.

However, it could still be worth a sizable sum of money.

Anna continued: “This one would be priced at £9,000. I find it an interesting design that holds a true 1970s vintage style.”

When the Princess Royal married Timothy Laurence, her wedding was very different.

For her first wedding, Anne had a public ceremony which took place at Westminster Abbey.

“Because of the size of the stones, I would say this engagement ring would cost around £20,000 to create.”

The choice of sapphires may also have been particularly important to Princess Anne.

“Sapphires symbolise honesty, trust and wisdom — they hold so much significance beyond being simple jewellery items.

“If someone is looking to create a more distinctive engagement ring, sapphires can be a good option as they are durable and are resistant to scratching.

“The blue also lends a unique look to the rings, as we can see with Princess Anne.”

The royal line of succession – who outranks who?

The line of succession to the British throne dictates the order in which each member of the Royal Family would ascend to the throne.

It is also seen as a ranking of importance with the head of the line, the Queen, taking the place of ruler.

Older children come before younger children. Traditionally boys came before girls, but this law was changed on 26 March 2015 before the birth of Prince William’s first child.

Incredibly, Catholics are still excluded from the line of succession, as are children born outside of wedlock.

The royals, who usually stick to a strict protocol when appearing in public, often arrive at events in ascending order of importance, with the most important royal arriving last.

Prince Charles, 72, is currently first-in-line to the British throne, followed by Prince William, 38, his oldest son.

Then comes Prince William’s children, George, seven, Charlotte, five, and Louis, two, and they are followed by Prince Harry, 36. Prince Harry is succeeded by his son Archie Harrison, born in May 2019.